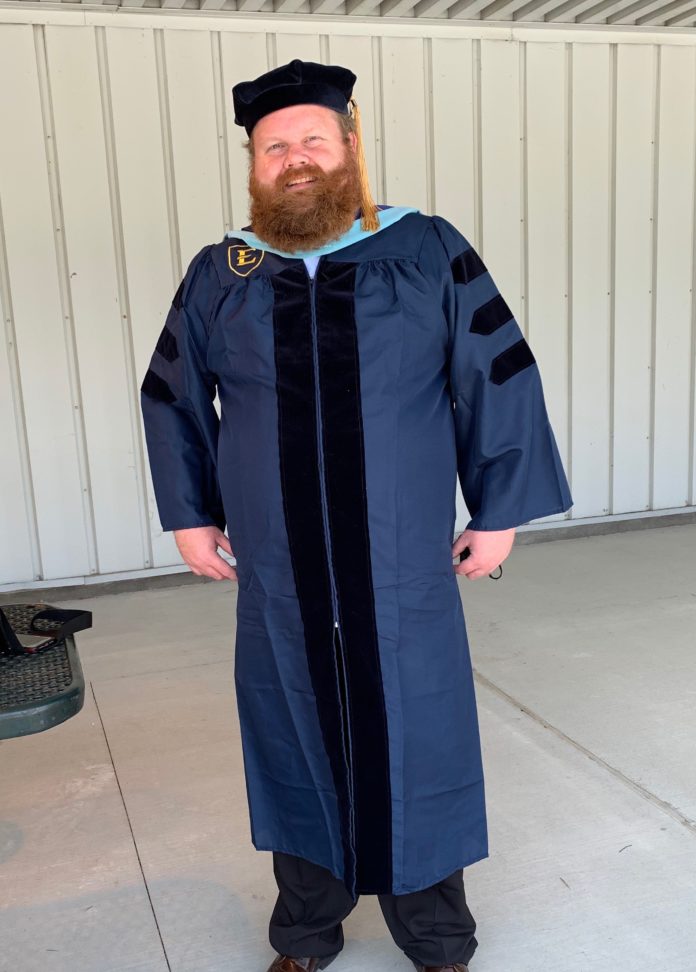 UPPER CUMBERLAND – Some highlights – and some controversies – that mark the 50-year history of Roane State Community College are summarized in a Roane State professor’s doctoral dissertation.

For his dissertation, Prof. John N. Brown interviewed five of the six presidents who have presided over Roane State as it grew and changed. Its title: “Perceptions of Roane State Community College presidents on the events shaping the institution’s leadership history.”

The dissertation encapsulates their insights and opinions about key events that affected Roane State through the years.

Brown said he worked on his doctorate from East Tennessee State University for four years and successfully defended his dissertation last year via a Zoom session before a committee of ETSU professors.

There were some birth pangs as the first Roane State campus came into being, Brown wrote.

Even the location of the flagship 104-acre campus was something of a controversy, his interviews revealed.

Local leaders settled on the current site – one of three originally under study in Roane County – because it was considered “politically neutral” and between Rockwood and Harriman.

Then, there were delays in construction of the first on-campus structure – what would become the Dunbar Building – because tons of concrete had to be poured to firm up its foundation.

During those early days, classes were held in temporary sites, including an elementary school and a church, as officials patiently waited out the construction delays. Students finally moved into the Dunbar Building in 1973.

The community college’s original faculty was nicknamed “The Dirty Dozen,” but there remains some debate to this day as to the exact membership of that fabled group, Brown said he learned.

Roane State “started out more of a junior college institution that was more focused on transfers to universities,” Brown said his thesis indicates. “Technical classes have since become much more prominent.”

Because Roane State then was a new institution, high standards were established to ensure credibility, he said.

The ensuing years saw “pretty steady growth,” Brown said, and Roane State was on track toward becoming one of the biggest community colleges in the state.

Fifteen Roane State faculty and 15 staff were reassigned to Pellissippi State. “There was anger about that for years and years,” Brown said. “It was a pretty traumatic event in Roane State history.” Roane State’s enrollment declined about 8 percent as one result, he said, but the decline was much less severe than what had been predicted following the split.

The college had embarked on the creation and growth of satellite campuses within its service area, “and that made a big difference,” Brown said. “It made higher education a lot more accessible to students.”

Roane State was also on the forefront of learning via the Internet, venturing into that new way of learning in the mid-90s and expanding upon it. The college’s IDEA room system linked students and instructors through two-way audio and video so courses could be taken at any campus. RSCC was among the first to offer interactive course delivery in Tennessee and continues providing this flexible option to students today.

In 2005, the Roane County Commission considered building a new jail next to Roane State’s flagship campus, and that proposal was greeted with widespread opposition. “As one person I interviewed put it, it would have been a 50-year decision,” Brown said. Having a jail next-door “would not have been good for the curb appeal of the college.”

Petitions were circulated to put the issue of borrowing money for a jail near the college on the ballot, and it was voted down.

Throughout Roane State’s history, its mission has been to make higher education accessible in underserved areas in rural Appalachia. “Roane State continues to fulfill that role,” Brown said. “That’s the best thing about working here – I get to help with that.”

He has been teaching political science and history full-time at the community college for 10 years. “I enjoy teaching,” he said. “I couldn’t see myself doing anything else.”