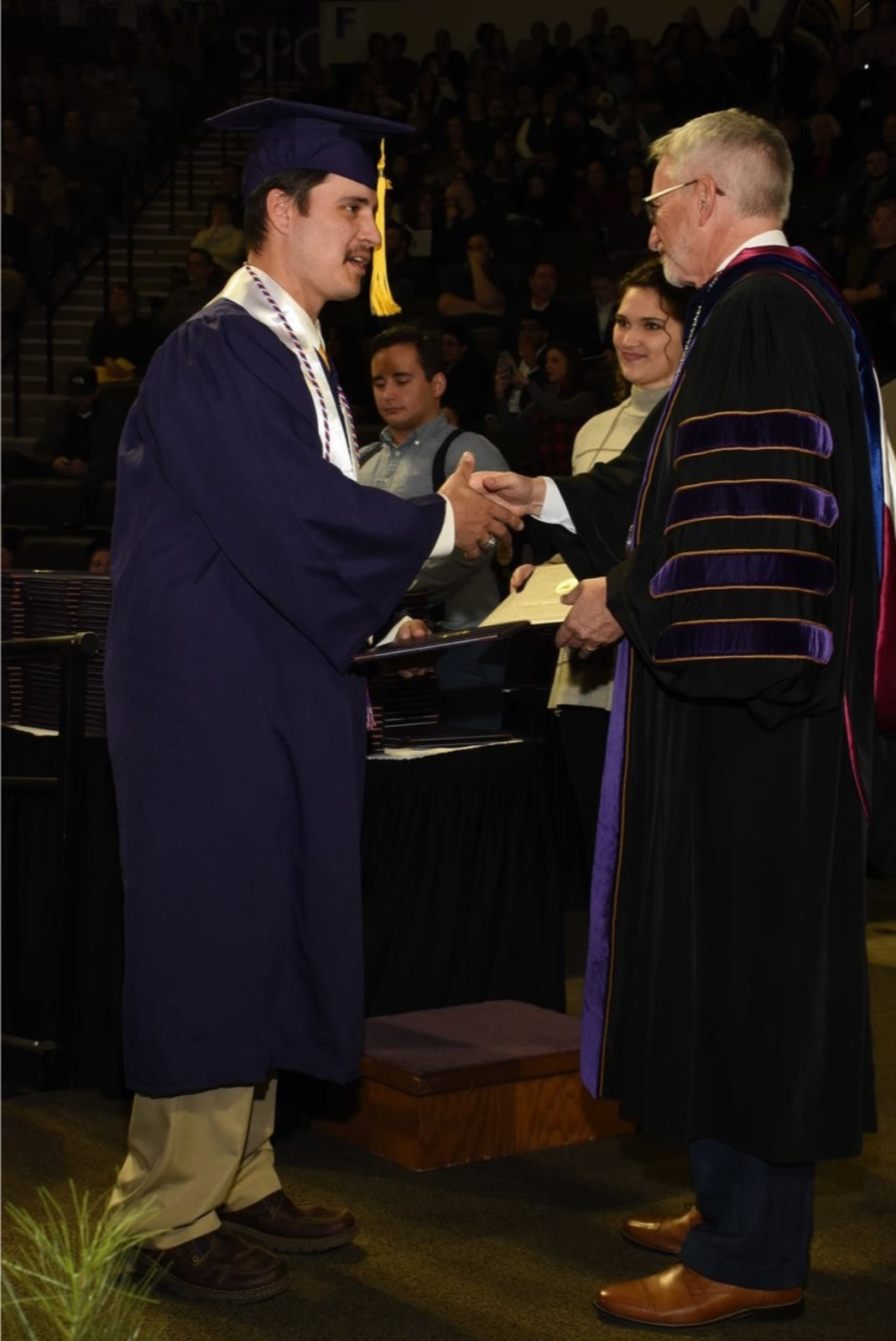 COOKEVILLE – When more than 1,100 degrees were confirmed during commencement ceremonies this past Saturday, a couple of Tennessee Tech students were especially thankful for the opportunity to earn a college degree.

For Jordin Patrick and Justin Mosher, just being alive was a major accomplishment much less earning a degree. Patrick, a U.S. Marine, was injured in combat in Afghanistan, while Mosher was involved in a near fatal car wreck that left him in a coma.

“There are stories here today, represented by these graduates, that show grit that makes this university so special,” said Mike Krause, executive director of the Tennessee Higher Education Commission and Tennessee Student Assistance Corporation, during his commencement address on Saturday. “These are the types of stories I reflect on when I consider what it means to be a TTU student.”

Krause used the stories of Patrick and Mosher, specifically, to make his point.

Patrick joined the Marine Corps Infantry in June 2009 after graduating from Gallatin High School. He was twice deployed to Afghanistan in support of Operation Enduring Freedom with 1st Battalion 8th Marines.

“I wanted to fight bad guys,” said Patrick. “I enlisted into the Marine Corps Infantry and shipped out a month after I graduated. I was in Afghanistan a year later, so I guess I got what I wanted.”

“What we didn’t know is that they were walking us into an IED strike,” said Patrick. “They lead us where they wanted us to go. My buddy, Lance Corporal Raymond Johnson, wound up stepping on one. It took his life.”

Patrick was within five feet of the IED blast and suffered a grade three concussion. He was hospitalized in Afghanistan and spent a month in rehabilitation. He received a Purple Heart for his service.

“I had the option of staying in Afghanistan or going home and I chose to stay and fight,” Patrick said.

Patrick spent six more years serving his country as a decorated combat soldier before being medically retired from the military and pursuing an education.

“I looked at different colleges around the state and found that Tennessee Tech was one of the most veteran-friendly schools in the state,” said Patrick. “I saw there were more than 300 veterans. I wanted to surround myself with more like-minded individuals than if I went somewhere else. Tech also has a military and veterans affairs office which is something I knew I was going to need. I utilized it a lot.”

He spent the next three-and-a-half years pursuing a degree in wildlife and fisheries science with a concentration in wildlife. He celebrated his graduation with his wife Andrea and three children: Cora, Jack and Sadie.

“I don’t think it has sunk in yet that I have graduated,” Patrick said. “It will probably sink in when I realize I don’t have anything to do.”

A graduate of Bartlett High School, Mosher was in his first year at Tech when his life took a sudden turn. On Feb. 23, 2014, Mosher was driving on Willow Avenue past Tech when he fell asleep at the wheel and his car went off the road and plunged down a 30-foot embankment. He was ejected from the car and sustained a broken clavicle, two fractured ribs, a broken jawbone, a shattered pelvis and three brain hemorrhages. He spent six weeks in a coma and the next year in rehab, learning how to walk and talk again.

“My memory was pretty foggy for the first couple of months,” said Mosher. “My recovery was ridiculously hard. The odds of my complete recovery was like a point-one percent. The only reason why I was able to do that was because of my family, friends and fraternity, helping me every step of the way.”

Mosher returned to Tech in the fall of 2015. His Kappa Sigma brothers helped with the transition back to school after spending a year in and out of rehab and readjusting to life in general.

“It was kind of an adjustment for socialization,” said Mosher. “I was older than a lot of the guys, so I felt like I was their uncle or their dad’s friend. It was weird.”

Mosher’s remarkable comeback was complete when he walked across the stage and shook the hand of Tech president Phil Oldham, conferring an engineering degree and ending his time as a college student.

“I’m excited about enjoying the relaxing retirement of not being an engineering student,” said Mosher. “It’s kind of weird. It’s a little bit surreal. You know it’s going to happen, but you can’t really understand or comprehend it.”

Mosher says he plans on doing some fly fishing and casting his resume out to see if any companies will bite for a job.

“I always thought I was going to graduate from college but I never really expected the day to come,” said Mosher. “I’ve always been very determined. I’ve never once thought about giving up.”