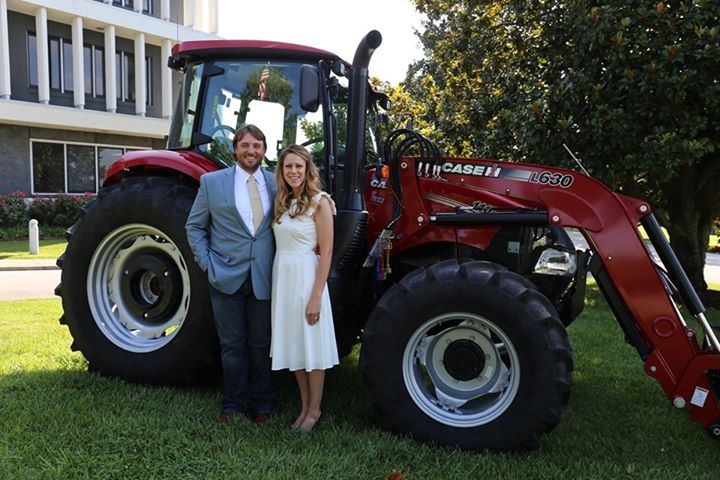 “This year at the 75th anniversary of the Young Farmers group, we were unbelievably humbled to receive this honor,” said April.

April said that she and her husband, who are row crop, livestock and forestry farmers and have been involved with the Tennessee Young Farmer and Rancher program for five years, competed for the award at the urging of Clay County Farm Bureau’s county president Jeff Clements.

“Involvement in this organization has been one of the greatest things we’ve ever done,” April said. “We fell in love with it, its Christian values, the people who work there and the amazing farmers we’ve met and are now blessed to call friends throughout Tennessee.”

The young couple from the Moss community in the Upper Cumberland region of Tennessee competed against 13 other county contestants from across the state to be named state winners and will compete for national honors in January.

According to the Farm Bureau, the Pattersons were named this year’s winners based upon farm and financial records from 2018 as well as their leadership on their farm, in their community and Farm Bureau. They farm more than 1,000 acres of corn, soybeans and wheat. Meat from the Akaushi cattle they raise on their Acres of Grace Farm is sold directly to the public through their store, The Mill Storehouse, in Cookeville, and commercially as a co-operator for Heartbrand Ranch in Texas.

“It’s honestly quite humbling to receive this award and get to represent our great state of Tennessee and the Tennessee Farm Bureau,” Nick said. “Growing up, all I ever wanted to do was farm, and now I get to live that dream each day with April and both our families.”

Additionally, the Pattersons host A Southern Marketplace Barn Sale at Acres of Grace twice annually. This agri-tourism event draws thousands of visitors and is a sales venue for artists, craftsmen, entrepreneurs and agricultural product producers.

The Pattersons also open their new log home, Southern Grace Farmhouse, to the public for tours throughout the year.

“Our desire is that people will come to our home and leave inspired,” April said. “It’s on our farm, Acres of Grace Farms, which was passed down to us through my parents. This is the farm my dad grew up on and where he and his family of 10 farmed to survive. This land holds our family’s heritage. Nick and I have created a home that honors this legacy.”

As state winners the Pattersons receive a year’s free use of a brand-new Case IH tractor up to 150 hours. They also receive $1,000 and a fully-loaded Kubota RTV from Tennessee Farm Bureau, an insurance policy to cover the tractor for one year from Farm Bureau Insurance of Tennessee, $500 in qualified Farm Bureau Services, $500 in services from Farmers Services and a trip to the American Farm Bureau Convention in Austin, Texas, in January 2020, where they will compete for national honors with other state winners.

“Through our relationship with Farm Bureau we have been inspired to grow our farming operation, encouraged by so many amazing leaders in agriculture, and now we are excited and honored to serve our great state as we compete nationally in January in Austin, Texas,” April said.

Nick, who is also a licensed veterinarian, said that as he’s matured, farming has taken on many layers of meaning for him, both personally and globally.

“Growing up, farming was just part of my life and honestly our way of life,” he said. “One of the things that I love about farming is that somewhere in this country and maybe even around the world, someone else is able to do what they love to do – writing, teaching, serving in the military, etc. – because they are not having to worry about food security.”

Patterson pointed out that each American farmer is responsible now for feeding more than 150 people from what is produced on farms and put into the food system.

“I get to play a role in that,” he said. “When you couple that with knowing that we are also building soil health on our farms and using resources wisely and sustainably, it continues to make me be proud to be a farmer!”

To watch the video about the farm and an interview with Nick and April, click https://www.youtube.com/watch?v=V7V9yTfhcBA&feature=youtu.be