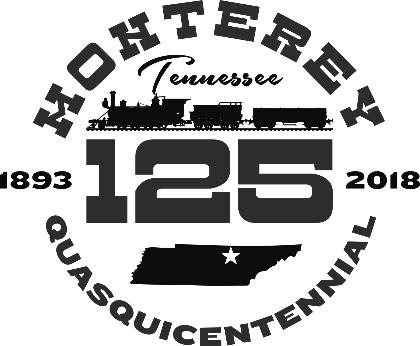 MONTEREY – It’s not everyday a community celebrates a quasiquicentennial, or 125 years, and a group in Monterey, part of the nonprofit Monterey Hometown Project, is working to make the town’s 125th birthday a special celebration.

Once known as Standing Stone, the town was officially established as Monterey in 1893. The construction of the Nashville & Knoxville Railway suddenly made the community more accessible to larger cities and vice versa. While the rail days gave way to highways and interstates, Monterey has maintained its small-town charm

The anniversary will serve as a special opportunity for current and former residents of Monterey to commemorate the past, present and future of the small town steeped in history – a town that’s served as one of the gateways to Cookeville and beyond. But, how different would life be – for residents and travelers alike – if there were no Monterey; no Standing Stone?

“That’s what sort of prompted us to see what we might could do,” said Anita Lane, president of the local historical society and member of the Monterey Hometown Project, of the anniversary.

The Project, Lane says, will be an ongoing program that will serve as a community chest for the town. Right now, the group is relying heavily on volunteer support primarily from people with Monterey roots, of course, to help with the grassroots effort.

“We’re trying to partner with people all across the world that have Monterey ties,” she added. “It’s really a unique concept and initiative that we’re trying to get going.”

Lane and the team behind the project, which includes members of various civic and city government boards, have plenty of ideas but as with many projects, funding is needed to bring those ideas to life.

“What would be missing in your life if there was no Monterey?” That’s something those involved with the Monterey Hometown Project hope to preserve and promote. Taking cues from the movie It’s a Wonderful Life, the Project is using aspects from the classic movie and incorporating them into the fundraiser’s theme and giving structure.

There are currently three tiers of giving – $125; $1,250; and $12,500. Funds raised through the campaign will be used to help provide the town with new welcome signs, refurbished lamp posts, and Christmas decorations.

The group is also hoping to use this opportunity as a way to solicit and collect stories from current and past residents to show the impact the town has had on the lives of all of those who have, at one time or another, called the town home.

“We’ve got a lot of potential to make this into something bigger than any of us could ever think about and sort of a legacy going forward,” Lane said.