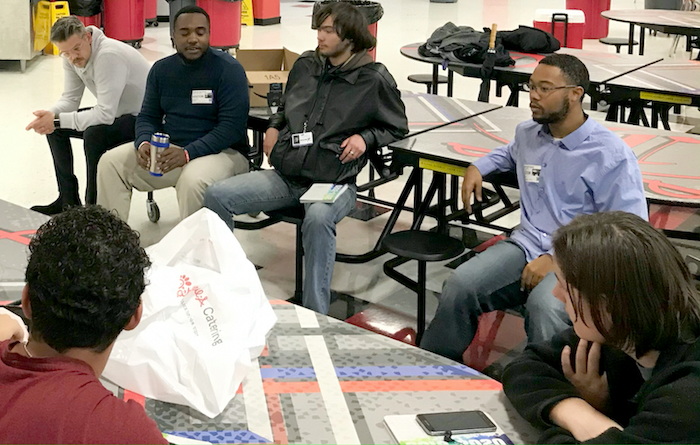 COOKEVILLE – Every month, a group of college students from Tennessee Tech University takes time out of their schedules to visit Cookeville High School and White Plains Academy in Algood to act as mentors to a select group of high school students there. At first glance, it may just look like the Tech students are playing games and talking about pop culture with the high schoolers, but there is much more going on under the surface.

“I think it’s a difficult time of life for teenagers, especially to envision what your life might look like after those formative years in high school are over,” said Cory Gleasman, Ph.D., Director of the P16 Mentorship Program, and assistant professor of educational technology and computer science education at Tech. “To have a mentor to rely on and confide in is so helpful. They provide some reassurance that the things that these students are going through, some of the turmoil they have in their lives and the uncertainty, that there’s someone there for them to talk to.”

The P16 Mentorship program originated with Impact Cookeville, a nonprofit organization dedicated to the city’s progress, diversity and inclusion, especially of citizens often left behind in the shuffle. The mentorship program aspect was designed to reach out to students identified by their schools as someone who could use a mentor. It was named from Impact’s desire to help support young people through the whole school system from preschool all the way through their last year of college: year 16 of their education.

“You can tell a difference in their overall demeanor,” said Gleasman. “Each of the students, regardless of their situation at home or at school, I think they feel that this is a safe place for them to just come share their thoughts and feelings. We connect with them with someone who is fairly close to their age – a college student. It’s not that jump of having an adult mentor. So, they’re able to see someone that is maybe three four years removed from where they are sitting.”

Class attendance has improved for the high school students as well, especially on the days when they see their mentors. The school’s guidance counselors have reported that each of the students have expressed how much they look forward to talking with their mentors

The Tech student mentors can come from any major, and Gleasman says they are always looking for more volunteers. The experience can be used to earn certified volunteer hours and learning service credits, and also gives Tech students experience in working with a non-profit organization. Many of the volunteers report back getting just as much out of the experience as their mentees.

“It’s just a fulfilling and rewarding process to go through,” Gleasman said. “Once you give back, it’s almost addictive. You just want to keep doing it.”

For more information about the P16 Program or to get involved, contact Gleasman at cgleasman@tntech.edu.