“At the city of Cookeville, we have a commitment to sustainable practices,” said Cookeville Mayor Ricky Shelton.

The utility-scale, photovoltaic electric power-generating facility is located in the heart of the Highlands Business Park on a 6-acre spread of rugged terrain deemed unsuitable for traditional industrial development due to its proximity to nearby wetlands. 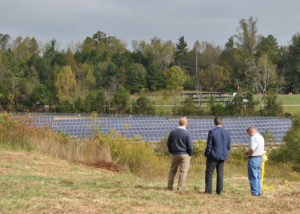 According to Restoration Services, Inc. (RSI), one of the project’s developers, the project was “ecologically engineered and designed to be in harmony with the site’s natural environment.”

Developed under a partnership between RSI and Vis Solis, in cooperation with Highlands Business Park and the City of Cookeville, the system is estimated to generate 1,396,000 kWh annually – enough to power 156 average-size homes per year and offset greenhouse gases produced by 222 passenger vehicles each year.

The array was constructed using 2,506 solar modules at 325 to 330 watts per module. The engineering, procurement and construction of Highlands Solar were performed by Vis Solis with TVAEnergy as the primary subcontractor.

The electricity generated there will then be sold to the Tennessee Valley Authority by Powerhouse Ten, LLC, project owner, through an interconnection with the Cookeville Electric Department. Powerhouse Ten will make quarterly payments – based on the greater of 4 percent of the revenue generated by the facility or $6,000 ­– to the city and Putnam County.

The Highlands Business Park is considered a sustainable business park by the Tennessee Valley Authority (TVA). Cookeville is one of only 28 designated sustainable communities in TVA’s seven-state service area.

“We’re thankful for yet another great accomplishment in making Cookeville the greatest city in America – not only to live in but to do business in as well,” Mayor Shelton said.