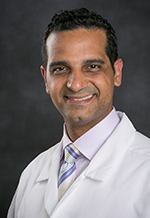 COOKEVILLE – Following in his father’s footsteps, cardiologist Dr. Vertilio Cornielle knew he wanted to practice medicine. But it was faith and fate that eventually led him to Cookeville.

Cornielle joined the medical staff at Tennessee Heart and Cookeville Regional Medical Center in July 2017. Originally from the Dominican Republic, he received his medical degree from the Santo Domingo Institute of Technology. As part of his training there, Cornielle was required to provide care to patients living in rural, underserved areas for one year before receiving his license.

“While I was doing that, I was exposed to both surgical and interventional cardiology,” Cornielle told the UCBJ.

He was certain he wanted to pursue a career in the field of cardiology but struggled with deciding which path was best for him – cardiovascular surgery, interventional cardiology, or clinical cardiology.

“It was a little bit of a conundrum,” he said. “I did know that I wanted to come to the states to train because it’s really the place to come and train as far as the best medicine.”

Cornielle’s father, a pathologist who completed his training in Spain, encouraged his son to complete his medical training in the US rather than follow the traditional route.

“He really wanted me to try the medicine here in the United States rather than go to Europe,” Cornielle said.

Cornielle went on to complete his cardiovascular fellowship training at the University of Virginia Health System in Charlottesville. He also performed his residency in internal medicine at Mount Sinai Medical Center in Miami Beach and a surgical residency at Saint Vincent’s Catholic Medical Center in Manhattan, New York.

After years of living in larger cities, Cornielle and his wife, his high school sweetheart, began looking for a more family-friendly community to raise their two young children.

“We’ve noticed that, as years pass by, those values are getting lost in the big cities,” he said.

Cornielle had kept Tennessee in the back of his mind after being told about the state’s charms and traditions by one of his former students.

“I always said it was God – I always tell Dr. (Alex) Case that,” Cornielle said. “His son was my student when I was rotating as a consultant at UVA. He told me, ‘My father lives in Tennessee (and) that’s where I’m from. If you like Charlottesville, you are probably going to like (Cookeville).’”

In addition to finding a new location steeped in values and small-town charm, finding a healthcare facility that provided a healthy work-life balance was just as important to Cornielle. When he isn’t working, he enjoys spending time with his wife and two children, ages 3 and 1.

“Unfortunately, when I started, I had an old injury (resurface) and so I had to stop,” he said with a laugh.

After taking some time to recover, he recently began training again. Along with golf and tennis, Cornielle likes to stay active through a variety of sports and says he and his family are looking forward to exploring what the area has to offer.

“I think you need to find a practice that has a good balance of what work is and also gives you time for your family,” he said. “I haven’t heard of any of my colleagues that are in a practice that offers the same thing that they offer here.”

Another thing the big cities don’t have, Cornielle says, is caring patients.

“What I’ve noticed here, the type of patient that you see here, they’re so warm,” he said. “They’re so loving and appreciative of what doctors do for them on a daily basis.”

In addition to seeing patients in the Cookeville office of Tennessee Heart, he will also be traveling to the Tennessee Heart outreach clinics located in Carthage, Crossville, Livingston and Celina.

Dr. Vertilio Cornielle is a Cookeville cardiologist; he recently joined the staff at Tennessee Heart and Cookeville Regional Medical Center, and his office is located at 228 W. 4th St. in Cookeville. For more information, call (931) 372-0405 or visit www.crmchealth.org.