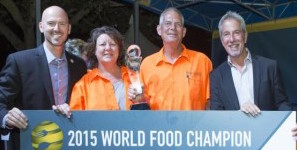 COOKEVILLE – A new television series set to debut this week will put a local adverting agency in the national spotlight – again.

MMA Creative, an advertising and marketing firm founded and based in Cookeville, produces the World Food Championship event, the subject of the show. It will be the second such series commissioned to depict the international cooking event, which debuted in 2012 and brought together 341 teams from 43 states and 17 countries in 2015.

The latest TV exposure, a six-episode run on Destination America, a Discovery network, will air starting Saturday at 9 a.m. CST. It will differ slightly from the inaugural broadcast, which was licensed to A&E, in that it focuses more on the personalities behind the scenes. Contestants compete in nine different categories, from burgers to barbecue to desserts. A champion emerges in each to face off at the “final table” for $100,000.

“From a creative standpoint, I think (the Destination America) series is better, because our production company was able to hone in on what makes this such an interesting sport, from the personalities and the techniques to the judging system that we use,” said Mike McCloud, MMA Creative president/CEO. “I like to say our event is like ‘food TV’ on steroids. Unlike a typical food TV show, which is shot in perfect settings – a TV studio, a pristine kitchen – our show is shot in reality with no chance for a redo. Our contestants not only have to work through a tough field, but tough conditions to get to the final table and win the big money

McCloud said it takes roughly 3,000 man hours each year to plan the World Food Championships – a low estimate, he imagines – and that’s managed mostly by a small staff housed at the agency’s Cookeville office on Neal Street. The payoff is big – WFC has awarded more than $1 million in prizes

and money in four years – and many contestants, including six from 2015, have also been cast in shows like Chopped, Cutthroat Kitchen and The Next Food Network Star.

But it’s also fruitful for MMA. McCloud said it’s now a “significant portion of the business” and a new growing revenue stream. He hopes professionals in the region – or anyone who’s tried to expose a product, idea or business to a national audience – will tune in.

“Advertising agencies are always marketing someone else’s product; it’s a pretty rare occurrence for a firm like ours to actually create something,” McCloud said. “But about five years ago we decided we could fill a niche in a market segment. We’ve worked in the barbecue space for years, marketing events like the Cookeville Cook-Off and other KCBS events, until we realized there was a bigger phenomenon there. And the fact we’ve now given birth to two TV shows is proof that when you invest

time, energy and resources into your passion, there can be new opportunity that generates new revenue for your company. That’s what the World Food Championships has become for MMA Creative.”

“In my 25 years, I’ve been involved in a lot of important campaigns in the Upper Cumberland, but this is probably the biggest thing my company has ever done,” McCloud said. “It’s important for us to be seen on this national level, because it just furthers our mission to make food sport a recognized and respected pastime. It will bring bigger, higher profile sponsors to the table, which is good. And it gives us legitimacy. It’s one thing to throw together a competition and do a good job locally, but it’s humbling – and is also a moment of pride – knowing that a great staff at a local company like MMA Creative can pull off such a global event. We all learned our chops and perfected our talents in Cookeville.”

There are plans, he added, for a third TV series, based on this year’s WFC event, which will be held in November in Orange Beach, Alabama. More on that event can be found at https://worldfoodchampionships.com/competitions or https://www.facebook.com/WorldFoodChampionships/.

Destination America, channel 167 on Charter in Cookeville or 286 on DirecTV, will air two of the six episodes on Saturday. Additional air times are Saturday, June 18, Saturday, June 25, Saturday, July 2, and Saturday, July 9, which is the finale. All episodes – except for episode two, set for 9:30 a.m. – begin at 9 a.m. The TV schedule can be found at https://worldfoodchampionships.com/news/587/wfcs-4th-championships-to-air-on-destination-america-in-a-6-episode-series.