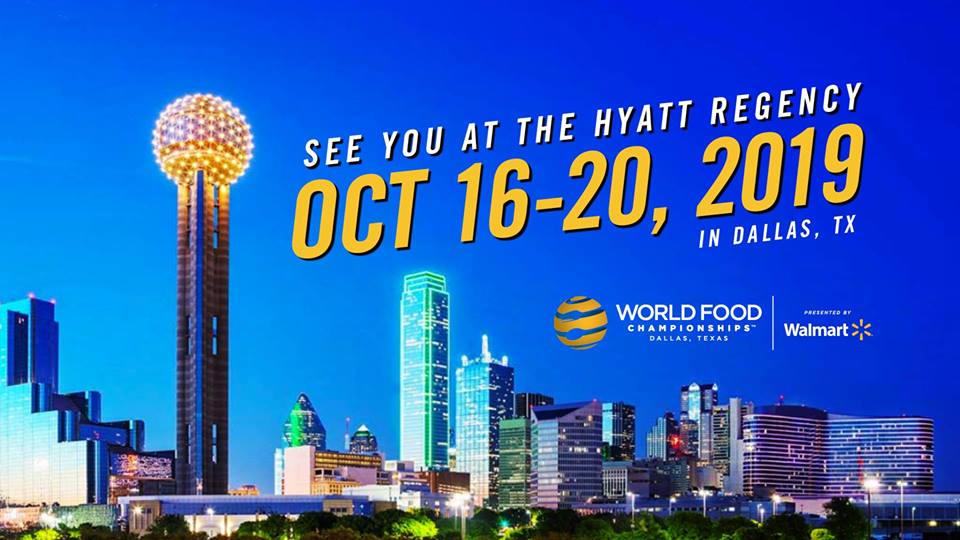 DALLAS – The largest competition in Food Sport, World Food Championships (WFC), announced it is moving its main event to the Reunion Tower Lawn in Dallas from Oct. 16-20, where the continued expansion of its international cooking tournament and food fest will occur over the next several years.

The WFC was founded in 2012 by Monterey native Mike McCloud, President and CEO of Cookeville-based MMA Creative, which organizes the event.

“They say everything is bigger in Texas. Well, we’re excited to make this BIG announcement and begin our transition to one of the largest metro markets in America,” commented McCloud, President and CEO of WFC. “Our event gets bigger and better each year, and we truly believe that relocating to Texas is going to help us expand Food Sport and the WFC enterprise in ways never before possible.”

Over the course of the event’s history, WFC has awarded more than $2 million in cash and prizes, garnered more than 6.9 billion media impressions and connected 200+ food brands with food fans, food bloggers and food contestants. In short, the WFC platform has given birth to “Food Sport” by providing a level playing field, a fair judging system, innovative culinary programming, ambassador opportunities, TV visibility and a process that allows talented culinary teams to gain the respect they deserve.

More than 20 million people have attended WFC or have seen it on national TV over the past seven years. But with the help of VisitDallas, the Dallas Sports Commission and many new major sponsors like Walmart, WFC plans to make its Ultimate Food Fight even more well known and bigger than ever in its new location.

“Dallas is the perfect destination to host the World Food Championships, and we are very excited to welcome Food Champs to Dallas,” said Phillip Jones, President and CEO of VisitDallas. “When it comes to competitive cuisine, Dallas’ status as a national food destination is on the rise. Recently, we were singled out by GQ critic Brett Martin as the “Next Best New Food City.” Celebrity chefs such as Dean Fearing, Kent Rathbun, Stephen Pyles and a variety of others are keeping the constantly evolving restaurant and entertainment scene attractive and in demand.”

Upon the announcement of WFC’s move to Dallas, McCloud pointed out that this partnership brings the opportunity to introduce foodies from the Dallas metro area to the fun and action-packed world of Food Sport. Dallas, which was recently named one of the Top Food Cities in America, has an impressive and growing culinary scene. In addition, Texas represents one of the top three competing states in WFC history. With more than 100 contestants over the past five years, Texas residents have always shown great culinary talent and performance at WFC. In 2018, Texas had nine competitors place in the Top 10 of key categories, with Beau Smith from LaMarque, Texas being crowned the World Seafood Champion.

WFC is expecting its team count in 2019 to exceed 500, a record amount comprised of chefs, home cooks and pro-traveling teams from around the globe. They will convene Oct. 16 through Oct. 20 at the Hyatt Regency and Reunion Tower facilities.

The Reunion Lawn provides over six acres of space for WFC’s food fight competition and consumer attractions to occur simultaneously, while still leaving room for the event to grow each year in the heart of Dallas.

“We can’t wait to unveil all of our food programming for this year,” McCloud added. “We have a ton of attractions and culinary experiences that will delight foodies from all walks of life.”

In addition to announcing the event’s host venue, WFC also revealed that the Hyatt Regency Dallas will serve as its official host hotel. With its convenient location to the main event, guests will have the ability to visit the Reunion Tower GeO-Deck, easily walk each day to WFC’s Kitchen Arena (the largest outdoor cooking arena in the world) as well as other downtown Dallas attractions.

“We have seen great growth in Food Sport over the years and we are very excited about this new transition,” said McCloud. “As we visited and talked with numerous sites in Dallas, the Hyatt Regency and Reunion Tower kept landing at the top of the list. From their convenient location to the city’s hottest attractions to incredible room options and potential for a hybrid inside/outside slate of programming, we believe we have found the ideal home for WFC.”