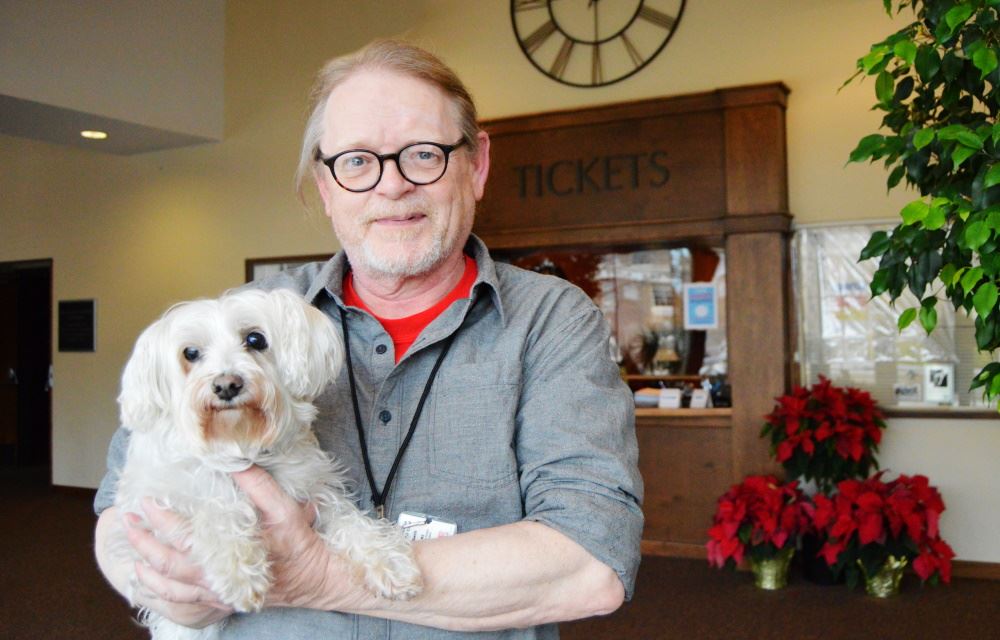 COOKEVILLE – The lights go down, and all the actors can feel it.

“You take that last big breath, and once you go out there, it’s like you’re going downhill with the clutch in and no brakes,” Cookeville’s Steve Gwilt said. “From then on, you’ve got to roll with it.”

That feeling – which can be both exhilarating and frightening – has driven Gwilt through countless productions in his long theatre career with Cookeville Performing Arts Center and other stages.

But there’s another moment he appreciates more.

“My favorite part of a show is the minute you utter your last line,” he said. “Even if you’re on for another scene or act… there’s a big weight that comes off. You got through your lines!”

In a similar fashion, Gwilt recently “got through” his lines on a role he played for more than 20 years – that of cultural arts coordinator for the City of Cookeville Department of Leisure Services. He retired on March 26, joined by co-workers and theatre friends in a celebration at Dogwood Park’s performance pavilion – the very stage he directed his final Shakespeare in the Park production (as a city employee, that is) back in October.

But Gwilt spent most of working days in the CPAC box office drawing up contracts, paying the bills and doing “whatever it takes to keep the cultural arts alive” in Cookeville.

The Chatfield, Minn., native earned his undergraduate degree in theatre and speech from Winona State University in Minnesota. In 1982, he moved to Cookeville to attend Tennessee Tech University, where he received a master’s in curriculum and instruction and Ed.S. in supervision and administration. He went on to teach education, speech and theatre courses at TTU for several years before joining Cookeville Leisure Services in July of 2000.

His passion for the stage goes back to eighth grade when he won the role of “Happy” in his school’s production of “Snow White and the Seven Dwarfs.”

“I thought, ‘That sounds like fun!’” he said. “I’ve always been kind of hammy and loud. Even from then, I really determined that I liked the rehearsal process.”

He also enjoyed the social aspect of theatre.

“Over the years I’ve discovered that the theatre community is a very inviting place for all kinds of people,” he said. “It doesn’t matter where you go. You can look for a community theatre, get involved and immediately make friends who are very warm and welcoming and happy to have you there. In that regard, theatre is kind of a place for weirdos, too – they’re accepting of about anybody!”

“When you were a kid, you could imagine you were anybody,” he said. “But as an adult, you don’t often get that opportunity – unless you’re in theatre. Then you get to pretend you’re somebody else.”

Gwilt has portrayed a host of characters through the years, his favorite from “Escanaba in Da Moonlight,” first produced by CPAC in 2006.

“I felt a real connection to the character, Albert Soady,” he said. “It’s just a fun show set in a deer hunting camp in the upper peninsula of Michigan.”

For that role, he won Best Actor at both the state and regional level through the Tennessee Theatre Association and Southeastern Theatre Conference. “Escanaba in Da Moonlight” garnered several other awards as well as it advanced to the American Association of Community Theatre national competition in 2007.

Gwilt said representing CPAC and Cookeville at competitions all over the Southeast has been a highlight of his career.

“Being recognized by people outside of your community – that’s really rewarding,” he said.

Gwilt is glad to have been part of the action as Cookeville has become known as a theatre-rich community. He also appreciates the opportunity to have worked in a facility he believes has allowed him more freedom in artistic expression than he might have gotten elsewhere. Being involved in the show selection process has been a plus as well.

In his time at CPAC, Gwilt has witnessed various remodeling projects and observed the continual flow of bodies that have gone through the facility. Performances have changed too.

He was there for the first Shakespeare in the Park production in 2004 and has valued the experience of doing outdoor shows, either as an actor or director, at Dogwood Park. One of his favorite roles was Richard III in 2014.

“That’s one of the ultimate Shakespeare roles to play,” he said.

Another change Gwilt saw during his time at CPAC was a temporary transition (due to the pandemic) to virtual productions, some of which he directed, that were available to audiences online-only.

Now that he is retired, Gwilt said he will miss the people he worked with as well as the schedule and rigors of the job.

“I have had the honor of working with a talented and creative staff who do everything possible to accommodate performers and patrons,” he said.

Throughout his career, Gwilt has been involved in more than 100 plays as either an actor or director. He savored each moment – and looks forward to more. Which means retirement has not equated to a curtain call for Gwilt. Nor will he become a stranger at CPAC.

In addition to traveling, renovating his home, gardening, napping, and resuming some of his past volunteer work with various community advisory boards and councils, Gwilt plans to stay involved in community theatre.

His show will go on.