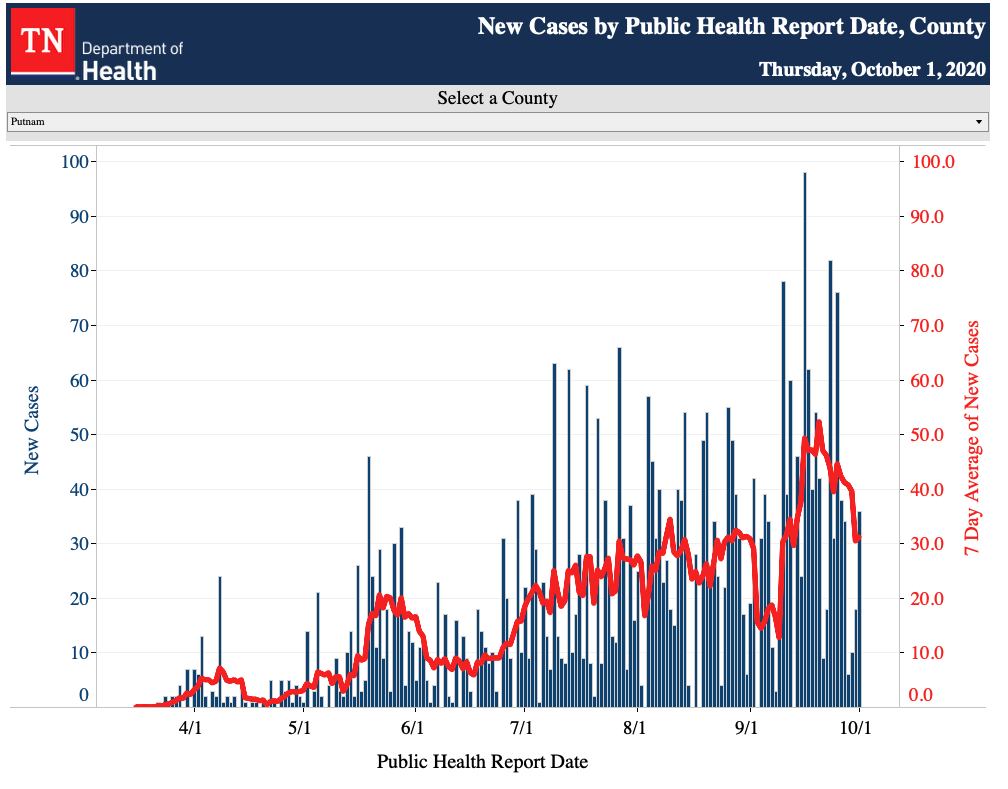 COOKEVILLE – It’s the list that no one wanted to see their community on. Still, last week the Cookeville micropolitan area, consisting of Putnam, Jackson, Overton and White counties, found itself listed in the New York Times as the number five COVID-19 hotspot in the country.

Although the community has dropped out of the Top 20 hotspots according to the New York Times, Putnam County is currently tied with Wilson County for the eighth-most cases in Tennessee during the last seven days at 218 cases.

Rural Tennessee is now experiencing the same trends that have been seen nationally, according to Tennessee Health Commissioner Lisa Piercey, MD, MBA, FAAP.  Piercey spoke about this trend during the governor’s press conference on Tuesday.

“You saw the big spikes in urban areas, but the first wave didn’t have a lot of rural component to it,” explained Piercey. “But since June and into July, we had the urban spike again, and then we had a noticeable and sustained trend in our rural areas.”

Piercey expressed her concerns that outcomes are likely to be just as bad, if not worse, in our rural areas because of comorbidities, such as diabetes, high blood pressure, and significant obesity, COPD or emphysema, heart disease, etc.

“We know our rural areas, just like every rural area across the nation, has those higher comorbidities, so they are not only more likely to contract the disease but to have worse outcomes.

“I worry that people are letting their guards down and not continuing to be careful and doing what they need to do,” said Putnam County Mayor Randy Porter.

He’s afraid that some people think that the Governor’s announcement relaxing business restrictions means that everything is good and that precautions don’t have to be taken anymore.

“That’s not the case,” Porter stated. “Our numbers are still elevated. We’re wide open. Tennessee Tech is in. Schools are back in. All the businesses are back open. We’re playing football; we’re playing sports; we’re doing all these things – our county is wide open, back to where we were pre-COVID, and we’re still seeing a lot of folks getting the virus.

“I don’t want people to think they can just do whatever they want. They still have to be careful and follow CDC guidelines, especially with flu season coming,” Porter stressed.

The start of flu season compounds the dangers associated with COVID. There have already been 13 cases of flu diagnosed at Cookeville Regional Medical Center (CRMC).

According to Dr. Mark Pierce, CRMC infectious disease specialist, people are easily at double the risk this season with the two circulating viruses that “look and act very similarly.”

Pierce emphasized that CRMC is prepared to deal with flu patients in addition to the daily average of 20+ inpatient COVID cases that the hospital has had since the pandemic began. There are typically five to 10 patients admitted with flu each day during the height of flu season.

“We are really prepared,” said Pierce. “Paul Korth (CRMC CEO) and the rest of the administrative team have done a really good job of getting us ready, so we are equipped to handle way more than we have. I’m not saying it’s not stressful since a lot of patients are ill, but we are very much equipped to handle more.

“At the rates we are now, a bad flu season wouldn’t overwhelm us, but if you got a bad flu season and then you also markedly increase your rates of COVID, you could be in trouble. But right now, I’d say we are equipped to handle that if it happens,” Pierce added.

Although some people think that since they are masking, there is no need to take the flu shot because the mask decreases the risk of getting the flu, CRMC officials are encouraging everyone over six months to get a flu shot and continue wearing a mask when in public.

There are dashboards available for those interested in real-time data on the COVID situation in our county and schools. Links for these are here:

The “smart phone” dashboard is at: https://arcg.is/4jinS

The “computer” dashboard is at: https://arcg.is/1CvqXC0

The School system’s dashboard is at: https://putnam911.maps.arcgis.com/