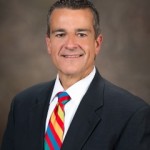 CHARLOTTE, N.C. – Cookeville Mayor Ricky Shelton is one of several elected officials and dignitaries set to honor the nation’s service men and women during Memorial Day weekend at the 2016 Coca-Cola 600, one of NASCAR’s most challenging races.

As honorary race director, Shelton, Cookeville’s mayor since 2014, will in the pace car to start the race, will participate in the pre-race drivers meeting, watch the race above pit row and will present the trophy after the race in winners circle.

The opportunity, he said, is an extension of Coca-Cola’s involvement in a recent “ghost sign” restoration project in Cookeville. The plaster on the exterior wall of Shelton’s West Broad Street office last year cracked; once removed, an original 1930s Coca-Cola wall advertisement was discovered underneath.

Coke commissioned the mural’s restoration, which was complete last August. Cookeville’s name was added as part of the project.

“This extreme honor came about from the (Coke) ghost sign restoration project that we partnered on last fall,” Shelton said. When the CCBCC-Coca Cola Bottling Co. Consolidated officials came here for the unveiling ceremony, we developed a great friendship. They loved their time here in Cookeville and all we are doing to grow and better our city, especially our 4th of July and Christmas celebrations.”

Since the Coca-Cola 600 is held over Memorial Day weekend, the pre-race show will pay tribute to veterans and active duty members of the U.S. Armed Forces. And for the second year in a row, cars will have the names of fallen military service members written across the top of the windshields

Joining Shelton is Casey, the 36th chief of staff of the United States Army from 2007-2011, and Bevin, recently elected the 62nd governor of Kentucky.