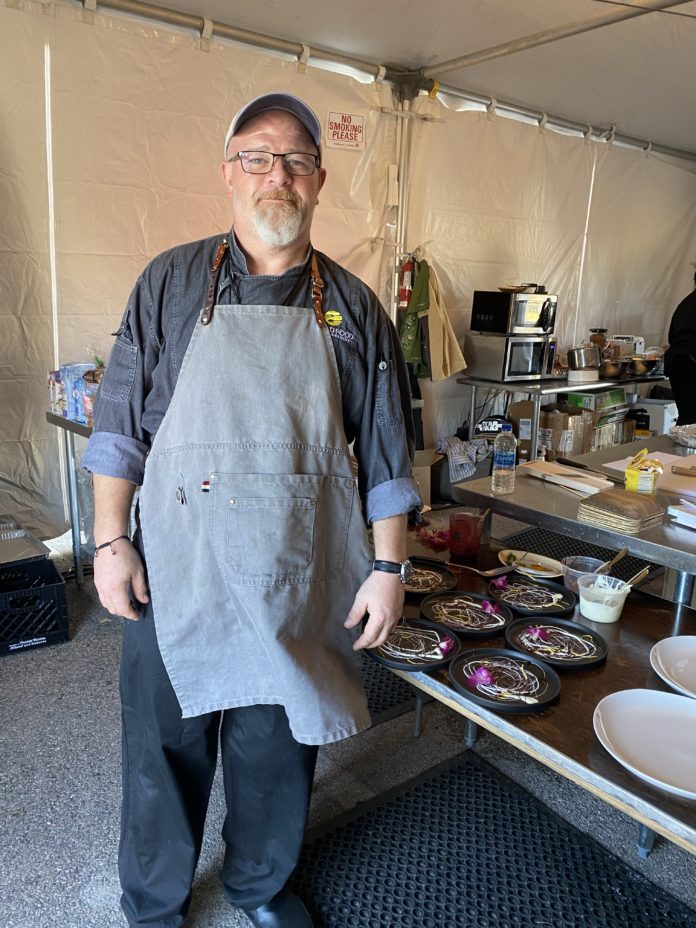 DALLAS – Cookeville Chef Chad Combs was one of the hardest working people at the World Food Championships (WFC) in Dallas this past weekend. The 2015 World Chef Challenge Champion has become an Ambassador, overseeing all food provided to the VIPs and general public for the five day event.

“It’s a whole lot different (from competing), because this is five full days of it nonstop,” Combs said. “Competing is about three hours. You go hard. You go strong. You give it your best foot forward. I’m 6 a.m. to 8 p.m. five days nonstop (in his current role).”

The VIP Lounge was one area where Combs’ talent shone. Although five former champions were slated to prepare food for the VIP lounge, Combs actually filled over half the slots due to scheduling conflicts and sickness, with the other champs covering the other half.

Combs is the owner and head chef at The Putnam Room, a fine dining restaurant located on the courthouse square in Cookeville, and he brought a little of his Cookeville flair to the VIP lounge with some of his specialties.

“A lot of the stuff I’m doing is stuff that I do at the restaurant, the shrimp saison, the artichoke dip, the shrimp and grits, a couple of other things,” he said. “Obviously, as the days go on, you get curveballs thrown at you, so you do stuff on the fly. Those recipes are quick and easy.”

Fortunately, Combs has some help in his tent. He said, “We get a handful of students and some volunteers, but pretty much all the food that is not competitor food – anything that goes to the general public has to go through me.”

Several new events were added to WFC this year including the Champion’s Table. For this event, past champions come in and do a three-course tasting menu for certain people – some sponsors, some chefs and others are lucky ticketed attendees.

“It’s a real nice sit-down where they have one-on-one with the chef,” explained Combs. “I help oversee those chefs and get their food plated and out. This year we also have a brunch on Saturday and Sunday that I have to do all of.”

Additionally, this year the Dallas Health Department required recipes for anything that was going to be served, so Combs had to coordinate with each chef to get their recipes and get them typed up, submitted and approved.

While Combs was bringing his culinary treats to the festival attendees in Dallas, he had no worries about what was going on at The Putnam Room.

“I have a good crew, and they are taking care of it,” he said. “I purposely didn’t schedule too many events while I was gone, but I have 100% trust in those guys. They handle it day-to-day anyway. I’ve been prepping them for me not being there for a while now, but obviously, as an owner, I check numbers on the regular, and everything is doing good.”

For Combs, the only thing missing from this experience was his wife, Madison. Late Friday he commented, “I’ve only talked to my wife once today, and that’s unusual for both of us.”