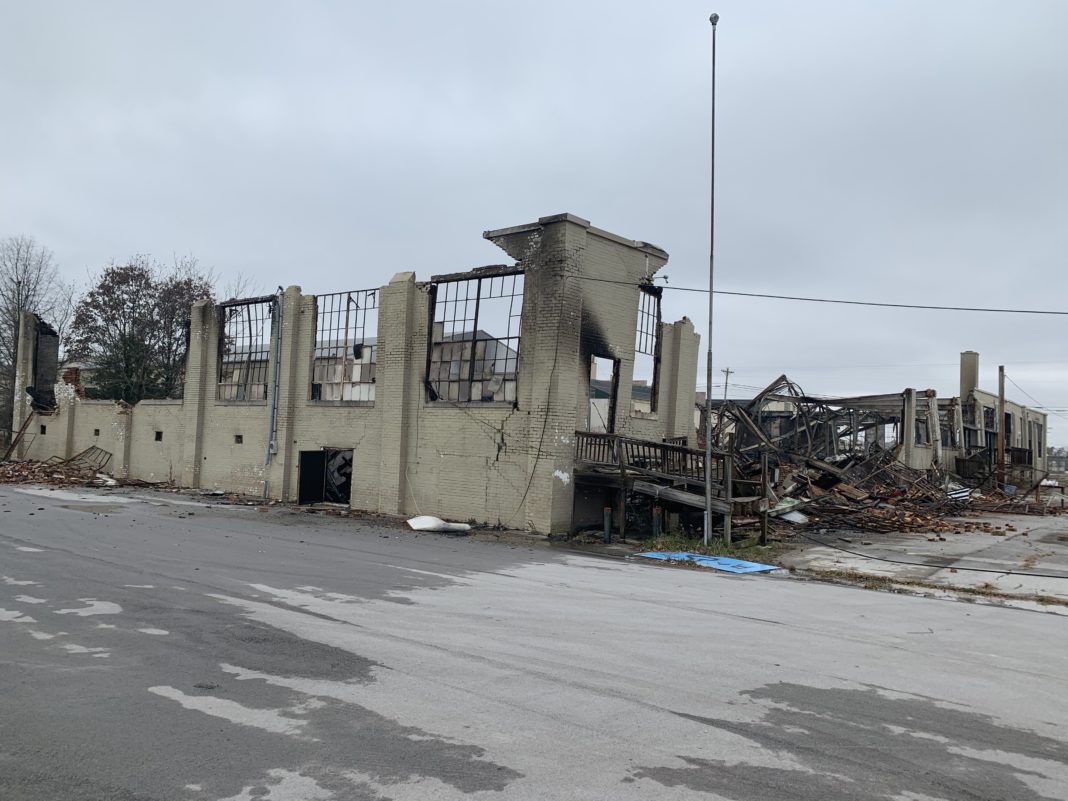 COOKEVILLE – As dusk descended on Cookeville’s WestSide, the last fire truck slowly pulled away from the old Wilson building that was destroyed by fire early this morning. Cookeville Fire Department (CFD) officials think it will be a while before the fire’s cause is known.

“We are working in conjunction with the Cookeville Police Department and (state of Tennessee) Bomb and Arson,” Cookeville Fire Chief Daryl Blair said. “They are on scene. It’s just a normal routine thing when we have any type of a large loss like this. They are called in to help assist.”

Even with fire investigators on the scene, Blair expressed he wasn’t sure when he would have the answers to the cause, saying that it all depended on what they found in the next few days.

“Right now, what we are having to contend with is the stability of the structure. A lot of the walls are bowed out. Some of them are gone,” explained Blair. “The inside of it where it collapsed, some of it is intact, but it’s not safe to get in there. We still have some hot spots, and we have quite a bit of water in the basement. We have to contend with that and get that out of the way; then we’ll make entry and see what we can find.”

Blair said that to his knowledge, the part of the building that burnt was not connected to any source of power. Another concern was the possibility of human involvement.

“We did have some reports of possibly homeless people, possibly could be there,” Blair shared. “At this time, we have not found anything. When it gets to where we can get inside, we will have to double-check all that.”

It is still unknown how long the fire had been burning before the initial call came in at 1:12 a.m. The first unit responded at 1:16 a.m., with a response time of 4 minutes and 48 seconds, according to Blair, encountering heavy smoke throughout the whole building.

As the other units started arriving, they saw the flames break through. It was fully involved in a short amount of time, and soon after that the roof collapsed.

“We had mutual aid due to the size of the fire,” said Blair. “Putnam County FD sent some equipment and manpower. Crossville Fire Department, Monterey Fire Department and Livingston Fire Department sent their aerials. And when we got them all positioned, they made a great difference as far as getting the fire under control, because we were able to get up over the walls and get to where the fire was.”

With the extra equipment and manpower, CFD was able to prevent the fire from seriously damaging the “B” part of the building where the other businesses are located.

Blair commended his firefighters for putting their hearts and soul into fighting this fire and doing a great job.

“I’m proud of them,” said Blair. “They did a great job with what they had to contend with, with weather conditions. It’s never a good time to fight a fire, but we had snow come in during the early morning.”

Blair was also grateful to the other fire departments and everyone else who pulled together for one of the biggest fires that Cookeville has seen in many years.

“I want to thank everybody that has come out to assist us – there’s so many, and I don’t want to miss anybody, so I’m going to cover them all like that. This community is so great whenever something like this happens, they all come together, and I’m just proud to be here in Cookeville because it’s a great community.”