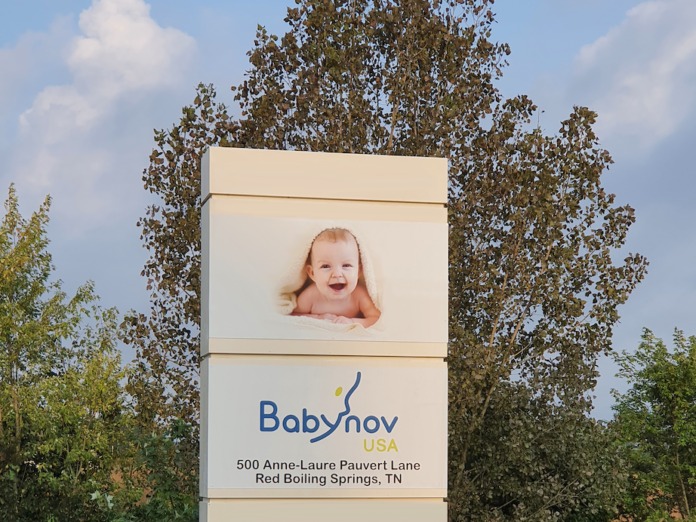 “Babynov USA’s decision to create over 100 new jobs in Red Boiling Springs is tremendous news for the Upper Cumberland,” said Lee. “We remain committed to supporting job growth in rural Tennessee, and an investment like this from Babynov USA will spark economic activity in Macon County and the rest of the region.”

Babynov USA is a new division of Global Baby, a French organic baby food manufacturer. The company will renovate an existing facility in Red Boiling Springs in order to expand its market to the United States.

Founded in 1999, Global Baby provides ready-to-feed baby milks and prepared food products, such as fruit and vegetable purees, full meals and milk-based desserts. The group is headquartered in Paris, France. The Macon County facility will be the company’s first in North America.

“Babynov USA felt very welcome in Tennessee, and we believe we found a place where our business will thrive,” said Babynov USA CEO Bruno Romand-Monnier. “The feedback on the engagement and reliability of the people of Tennessee motivated us to settle here. We now look forward to building our team and thank Tennessee government for its continuous support.”

Tennessee is home to more than 1,000 foreign-owned establishments that employ approximately 150,000 Tennesseans. France is among the top 10 countries for foreign direct investment in Tennessee, with French companies employing more than 11,000 people at nearly 90 establishments across the state.

Since 2015, TNECD has supported 42 economic development projects in the Upper Cumberland region, resulting in approximately 4,800 job commitments and $472 million in capital investment.

“We are proud to welcome another international company to Tennessee as French-based Babynov USA has selected Macon County for its first U.S. facility,” said Commissioner Rolfe. “Tennessee has established resources and business-friendly initiatives that make our state accessible to any international market. Thank you to Charly Lyons and the team at Tennessee Central Economic Authority for their assistance in this project, and we look forward to a partnership with Babynov USA for years to come.”

Local officials expressed their excitement at having Babynov commit to the Red Boiling Springs location.

“We are blessed to have Babynov USA locating its North American venture in Red Boiling Springs,” said Macon County Mayor Steve Jones. “This will create some desperately needed jobs to our area. We look forward to working with the company and hope to see them in production in 2021.”

“I am very proud Babynov USA has chosen Red Boiling Springs as the site to expand its product in the United States,” said Rep. Kelly Keisling (R-Byrdstown). “This investment means good jobs for Macon County and highlights the strength of Tennessee’s talented workforce and business climate. I thank our local officials and economic development leaders for bringing this investment to Macon County.”