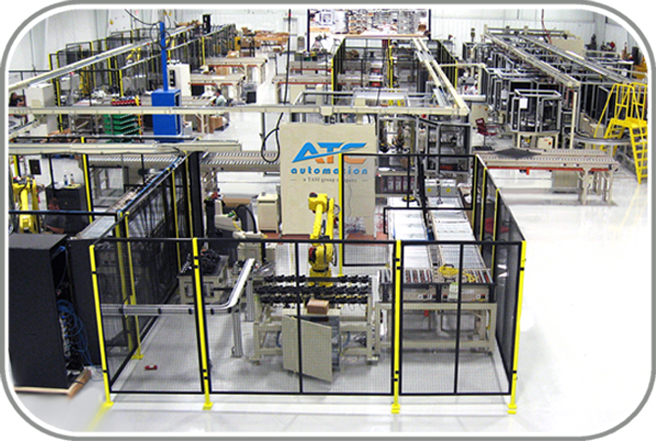 State officials were in town Thursday to announce ATC Automation’s latest plans. The company, which makes the machines that make products like headlamps, batteries and surgical equipment, is expanding its facility by 66,000 square feet, investing $10.4 million in Putnam County and hiring 110 new associates over the next five years.

Tony Green, sales and marketing coordinator, hinted at the company’s expansion during an exclusive interview with the UCBJ in June. ATC also recently bought two buildings across the street from its Mill Drive facility, which adds another 16,000 square feet for its purchasing department and as overflow.

GATC started in 1977 as a two-man small tool and die business. Today, it serves customers in the transportation, life sciences and consumer products/energy industries; the company designs, engineers and builds assembly lines and test equipment for advanced manufacturers, ranging from small components to complete turnkey systems. It employs 240 in North America, India, China and Mexico, many, company officials said – around 70-80 – hailing from Tennessee Tech University.

As part of the expansion, ATC will construct 45,000 square feet of new manufacturing space and 21,000 square feet of administrative and engineering offices. ATC plans to break ground within a couple months. The expansion to the existing Cookeville facility is expected to be completed by mid-2017, with potential new manufacturing starting in the first quarter of next year. ATC will also make upgrades to its existing facility and purchase another building currently being leased.

The majority of ATC’s hires will be production engineers. Bill Curran, ATC’s president, said expanding the Cookeville facility is needed to hire the new engineers and support staff in order to meet growing demand for its equipment from manufacturers across the globe, including Tennessee-based companies.

“We are excited to begin our latest expansion project,” Curran said. “ATC’s plans through 2020 include growth from $75 million to over $100 million in revenue.”

Cookeville, meanwhile, continues its hot streak. Officials have announced 500 new jobs from existing industries since 2014, Cookeville Mayor Ricky Shelton said, not including new positions added with Ficosa and Academy Sports + Outdoors. Tennessee, according to The Brookings Institution, is growing advanced industry jobs faster than any other state in the country.

“Our community has been asking for more higher-paying jobs. ATC answered that call today,” said Randy Porter, Putnam County executive. “This expansion is going to go a long way to confirming what I already know – advanced manufacturing…we have a future for that here in our region, and I think that’s great.”

This is breaking news. The UCBJ will continue to update this story. UCBJ partner Jay Albrecht also contributed to this story.