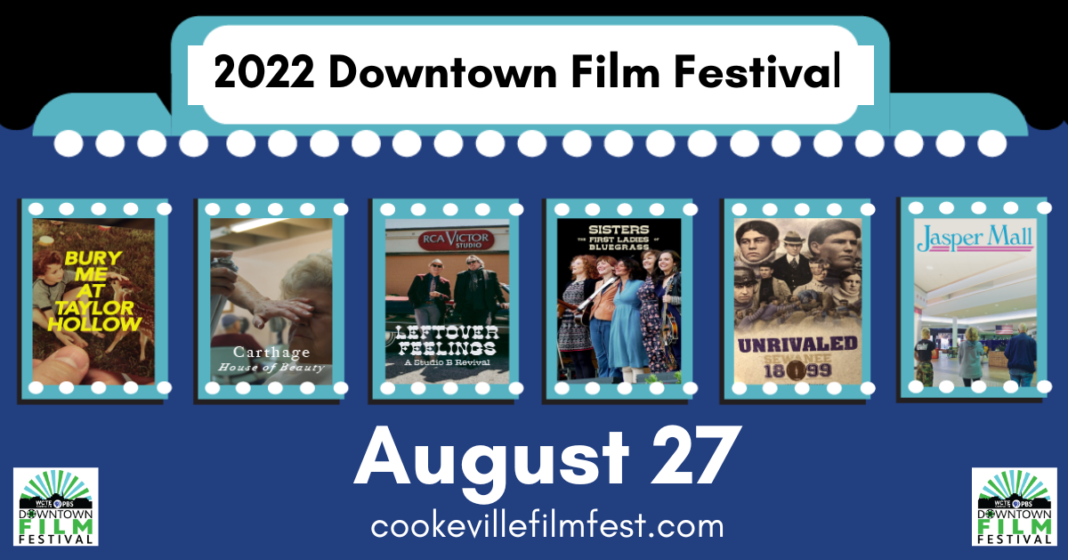 COOKEVILLE – The third annual WCTE-PBS Downtown Film Festival, in partnership with the Cookeville Performing Arts Center and RiverRun International Film Festival, is scheduled for Saturday, Aug. 27, 10 a.m. – 5 p.m. at the Cookeville Performing Arts Center.  This year’s festival will feature a unique collection of films from independent filmmakers across the southeast United States.

The 2022 festival will premier two films shown earlier this year at the 2022 RiverRun International Film Festival.  “Leftover Feelings: A Studio B Revival” is a film that spotlights the legacy of Music City’s most significant studio through the lens of two godfathers of Americana music with directors Ted Roach and Logan Sebert. “Sisters: The First Ladies of Bluegrass,” is a music documentary short that follows the all-female, bluegrass supergroup The First Ladies of Bluegrass as they participate in the 46th annual Telluride Bluegrass Festival.

Other films showcased this year will include “Unrivaled,” a compelling, historically accurate, insightful, riveting documentary film on the team, the season, and the rare convergence of talent, personalities, and drive that made Sewanee’s 1899 football season truly legendary, and “Bury Me at Taylor Hollow,” a look at John Christian Phifer’s 15-years working in the conventional funeral industry before leaving it all behind to create the first conservation burial ground in Tennessee. “Bury Me at Taylor Hollow” offers an unforgettable and hopeful glimpse into an alternative approach to death and dying in America. “Carthage House of Beauty” won is an 11-minute documentary film by Allison Inman and won Best Tennessee Short at the Nashville Film Festival in 2021. The award winning film gives viewers a glimpse into the day and life of a beauty shop in Carthage, Tennessee and how one generation of women have held the test of time. The final film “Jasper Mall” which premiered in season 6 of Reel South, a popular PBS film series, is about a dying mall outside of Birmingham and the individuals at the center of this rapidly changing culture.

Attendees will have the unique opportunity to hear from the directors, producers, and special guests from the films during the talk-back sessions and Q&A session.