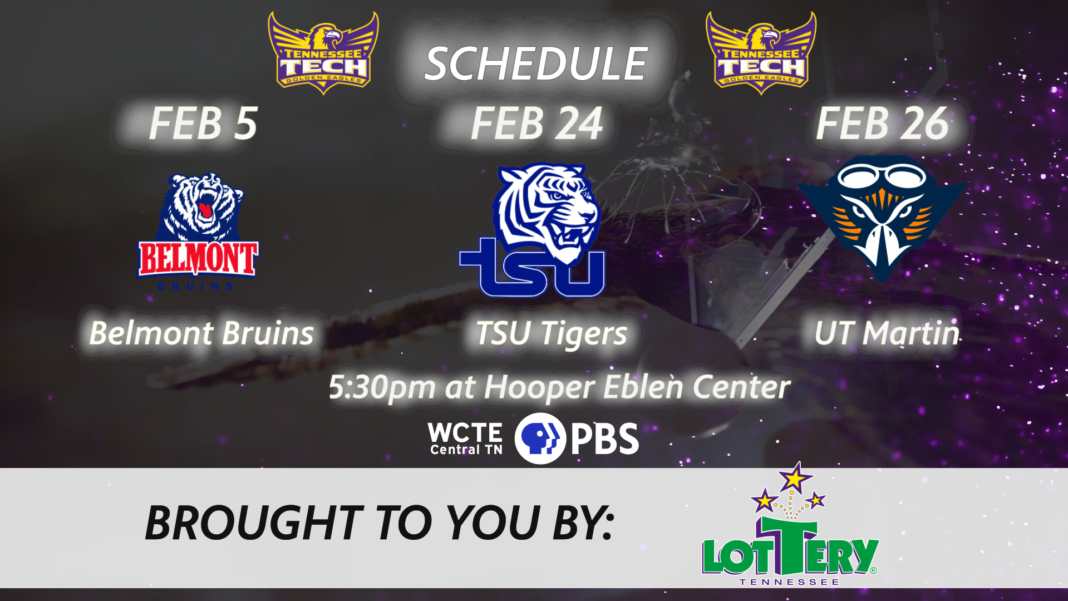 COOKEVILLE – WCTE PBS will be broadcasting three upcoming Tennessee Tech Golden Eagles doubleheaders with women’s basketball set to tip off at 5:30 p.m. and men’s basketball at 7:30 p.m. The Golden Eagles will be playing against the following universities: Saturday, Feb. 5 with Belmont University; Thursday, Feb. 24 with Tennessee State University; and Saturday, Feb. 26 with UT Martin.

Tennessee Tech currently competes in the Ohio Valley Conference (OVC). The OVC has the honor of being the only conference to boast the nation’s leaders in scoring, rebounding and assists all in one season.

“WCTE PBS is thrilled to have the opportunity to broadcast three women’s and men’s games to showcase such great talent rising on the court for our viewers and sports fans throughout central Tennessee,” said Brent Clark, WCTE PBS’s Director of Content & Digital Media.

The game will not be streamed on WCTE PBS’s YouTube TV channel due to licensing streaming rights owned by ESPN. The game can be accessed through the ESPN App on smartphones, tablets, and connected streaming devices or via espn.com/watch.

WCTE Central TN PBS has served the Upper Cumberland 40+ years as the region’s premier storyteller and is the only television station in a 75-mile radius of Cookeville making it a strategic partner in education, health services, government, arts and music. WCTE is a 501(c) 3 and is owned and operated by the Upper Cumberland Broadcast Council. WCTE Central TN PBS is one of only 350 PBS member stations nationwide.