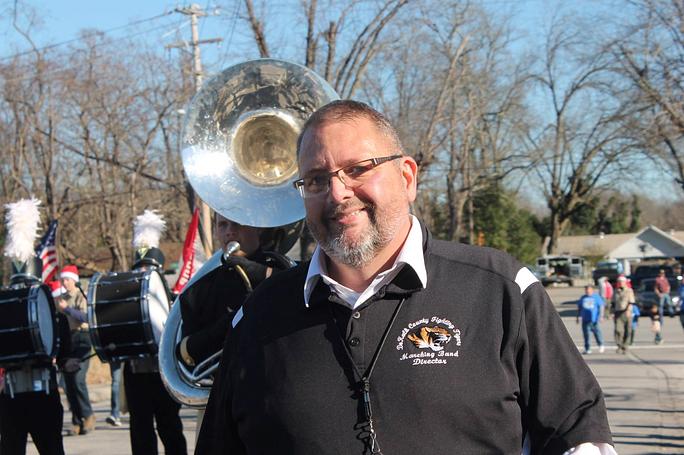 COOKEVILLE – It took only one semester at Tennessee Tech University to change Tracy M. Luna’s life.

Tracy, who grew up in Waynesboro, Tennessee, enrolled at Tech in 1991, and was excited to join the world-famous Tennessee Tech Tuba Ensemble directed by R. Winston Morris. Unfortunately, a medical condition forced Tracy to leave Tech prior to completing his degree.

He completed his bachelor’s degree in 1997 at the University of Tennessee at Martin. After several years as a high school and middle school band director, Tracy returned to Tech in 2008 to complete his master’s degree, and Morris welcomed him back into the tuba ensemble. In 2010, Tracy graduated from Tech with a master’s in curriculum and instruction.

“Winston was his biggest and most consistent encourager, even through the years when Tracy wasn’t at Tech,” said Tracy’s wife, Laura. “Somehow, they kept in contact. Winston didn’t have to let him back into the ensemble, but he did.”

When Tracy passed away in December 2021, after a 17-month battle with pancreatic cancer, Laura wanted to honor his life with a memorial scholarship. And she knew she wanted the scholarship to be for Tennessee Tech students. The Tracy M. Luna Memorial Music Scholarship will be awarded to incoming freshmen or transfer students majoring in music or music education.

When he served in the position of band director for DeKalb County High School from 2015 until his passing in 2021, he had one particular student who stood out. He had a rough home life, lived in poverty and struggled in school, but he could play any instrument Tracy put in front of him. The student found his place and purpose in band. Laura recalls that she and Tracy talked about ways they could help this young man.

“Tracy said, ‘You know, if I can get him a band scholarship to a university for just one semester, that will give him a chance,’” Laura recalled. “That will keep him out of jail for one more semester. It might give him a chance to be around different people – to see something different – and he might have a shot at getting out of his circumstances if he has just one opportunity.”

Tracy spoke to the director of a nearby university and helped the student enroll, receive a scholarship and join the university’s band.

“People always ask the Paul Harvey question,” said Laura. “What’s ‘the rest of the story’? Did he graduate from the university? And the answer is no, he did not. But it gave him a different opportunity. That student joined the military, plays in the military band and has a wife and children. That is what I call breaking family curses – breaking through all of that poverty and dysfunction. And maybe the scholarship didn’t do all of that, but it gave the student a chance at something different.”

Laura explains that Tech was a similar opportunity for Tracy. Tracy came from a small town with a lot of poverty, but Tech showed him a different vision of what was possible.

“That’s why our scholarship is not a four-year scholarship, and it’s not for a student with a perfect 36 on the ACT,” said Laura. “It’s for a student from a rural area who thinks music might be a pathway to explore.”

The Tracy M. Luna Memorial Music Scholarship will be funded through gifts from friends, family and the community Tracy loved. While a portion of the funds has been received, additional funds are needed to permanently endow the scholarship. To make a gift to the scholarship, visit tntech.edu/giving or mail a check to Tennessee Tech, Box 1915, Cookeville, TN 38505, and indicate that you wish for your gift to support the Tracy M. Luna Memorial Music Scholarship.