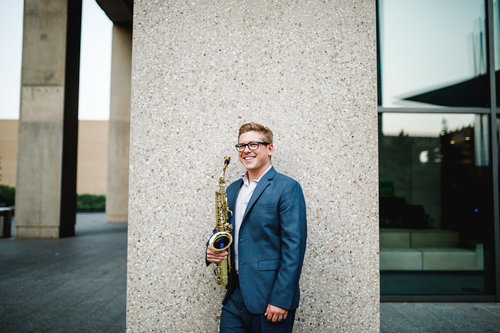 Tracy is both a saxophonist and a teacher, and he has been awarded the Doctor of Musical Arts degree by Michigan State University. He currently holds the position of associate professor at Southwestern Oklahoma State University (SWOSU). At SWOSU Tracy teaches courses in music theory, chamber music and 20th century music.

While at MSU, the saxophonist was an assistant teacher to world-renowned saxophonist Joseph Lulloff. Tracy was also granted the College of Music’s highest honor and was selected as a winner of the Honors Concerto Competition. Here he also performed as a soloist with the MSU Symphony Orchestra and the Holland Michigan Symphony.

Tracy has traveled across the United States and performed at multiple high schools and colleges. In addition to his performances, Tracy has also received awards for his skills on the saxophone including in, Coleman, Fischoff, Plowman, MTNA and North American Saxophone Alliance Chamber music competitions.

Tracy has also had the honor of performing new pieces for composers Phillip Sink, Andy Francis, Reynold Simpson, Justin Rito and Curtis Smith. In addition to his Ph.D., he holds a master’s degree from MSU, and a bachelor’s degree from Central Michigan University where he studied under John Nichol.

Wattenbarger Auditorium is in the Bryan Fine Arts Building on Tech’s campus at 1150 N. Dixie Ave., Cookeville. This concert will be free to attend.