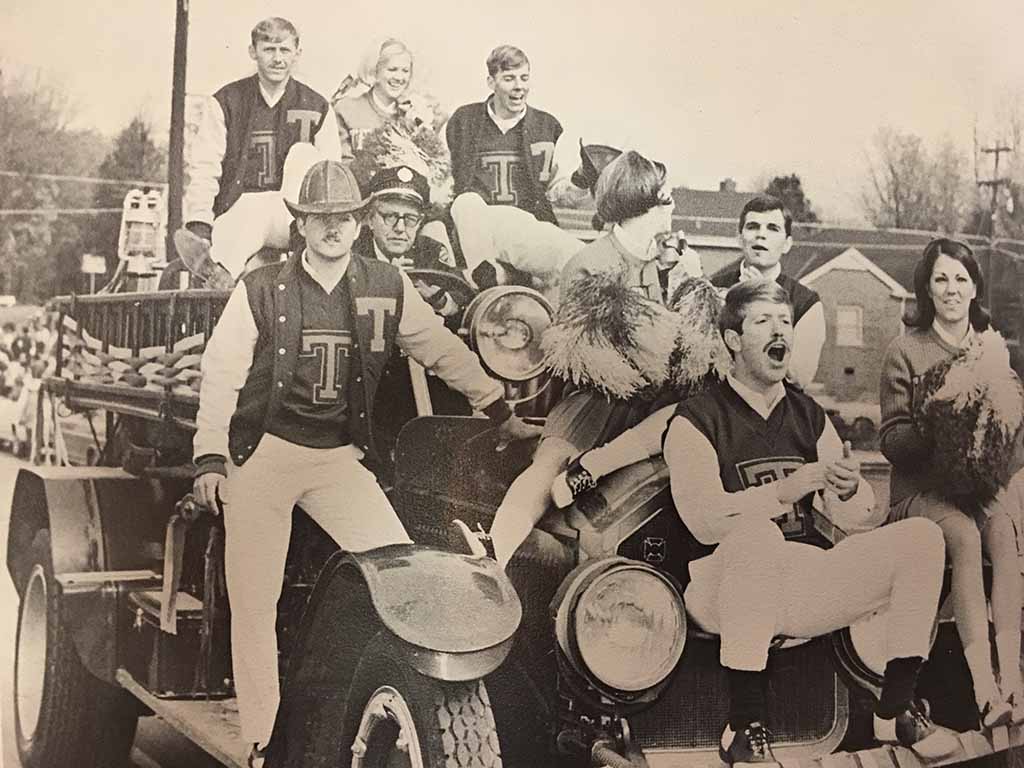 COOKEVILLE — “Did you ever in your wildest dreams think that Homecoming would mean that we’re coming to your home?”

On Nov. 14, Brandon Boyd, director of the Crawford Alumni Center, welcomed the Class of 1970 to their Golden Grad reunion — in their own homes. The reunion, held virtually this year, was originally scheduled to be part of Homecoming weekend. While Homecoming 2020 lacked the traditional parade and football game, Tech still found ways to honor the Class of 1970.

The Golden Grads enjoyed a virtual reunion that included a slideshow of photos from the 60s and 70s, a video tour of Cookeville and Tennessee Tech, class memories, the Tech Hymn, popular songs from 1970 and more.

“I love to hear about the successes of our alumni after they leave Tennessee Tech,” Oldham said to the Class of 1970. “And even more than that, I love to hear your memories — the stories that defined your time in Cookeville and at Tech. You set a high standard for all of us, and we continue to try to live up to that.”

When the class of 1970 enrolled as freshmen, Greek organizations were not allowed on campus. Some operated “underground” for years, and how much President Derryberry knew or admitted to knowing about these secret societies remains a mystery. But by 1970, several local fraternities and sororities had gone national, and many are still on campus today.

In addition to the significant role fraternities and sororities played in their lives, Golden Grads reminisced about local favorites like John’s Place and Ralph’s Doughnuts. But they also recalled the more serious events of the Vietnam War.

Major Mike Driskill, industrial technology, remembered the effect the draft had on he and his classmates. Driskill was excited to see Gifford Walker on the call, as the two participated in the Golden Eagle Sports Car Club together.

“The dean had two lists—the one he sent to the hometown newspaper, and the one he kept in his top drawer,” said Walker. “That wasn’t a good thing — during the Vietnam draft — to make it on that second list.”

Larry Alexander, industrial technology, and his wife Carleen McKinley Alexander, ’69 foreign language, are Tech Lovebirds — alumni who met their spouse on campus. Alexander said one of his fondest memories of Tech was meeting his wife. They were married for 48 years until she passed way in 2016.

“I used to tell her those were the best days of our lives,” he said.

Linda Tucker, human ecology education, said Leonard Crawford was one of the reasons she enrolled at Tech. Crawford, the namesake of the Crawford Alumni Center and Crawford Hall, directed Tech’s alumni and job placement offices, student recruiting and campus workshops.

Mickey Phipps, industrial engineering, remembers there being 2,200 freshmen in 1966, the largest class in Tech’s history.

“I was one of 1,000 freshman engineers,” he said. “I’ll never forget being in Derryberry Hall and they’d say, ‘Look to your right and look to your left. At the end of the year, only one of you will still be in engineering.’ That was pretty true. And everyone remembers registration and public programs. What a fun thing that was!”

Lieutenant Colonel Jim Mapes, health and physical education, titled the notes he prepared for his classmates, “It all started on the quad.”

Mapes recalled his first day on campus. He had only been to Tech once before for a two-hour information briefing and wasn’t familiar with Cookeville or with the campus.

“I was dropped on the quad at what was called the new freshman dorm, currently Crawford Hall,” he said. “My dad said, ‘good luck.’ And I thought, ‘Okay, well, I’ll give this a shot, but I don’t know much about where I am or what I’m doing.’”

Mapes said he still visits Tech from time to time for Homecoming, ROTC reunions and other events.

“I usually make a point to walk the quad, where it all started,” he said. “In my mind, I can imagine the hustle and bustle of the quad, full of students talking and laughing. I can hear the chimes from Derryberry Hall and fondly recall hearing the Tech Hymn at 11 p.m. every night.”

“My father took me to Tennessee Tech, dropped me off, gave me $5, and said ‘good luck,’” said Grooms. “No money. First person in my family to go to college. I had no idea what I was doing there.”

After his first term, Grooms’ GPA was a 0.0. Four years later, he had turned things around.

“I went from a 0.0 to a 4.0 GPA in four years,” he said. “Since then, I have earned three doctorates, a Master of Science degree and a Master of Business Administration degree. I received a better education than I gave myself credit for, and so should others who pass through the halls of Tennessee Tech.”

In 2009, Tech recognized Robbins’ 100th birthday at the Dixie College Day Celebration. Robbins was born in 1909, two days after Dixie College (the private institution that would later become Tennessee Polytechnic Institute and eventually Tennessee Tech University) was founded. Robbins passed away in 2011 at the age of 102.

“I never really considered going anywhere else for college, and I’m so grateful that I didn’t,” said Mesich. “It’s been an incredible legacy. Tech was exactly where I needed and wanted to be, and it’s made my life so much richer. My mother was my Tennessee Tech cornerstone. Bringing her to Homecoming and her Golden Grad reunion every year was incredibly special for her and for me.”

Members of the class of 1970 now live in 34 states, and Golden Grads from Virginia, Texas, Pennsylvania, North Carolina, Nevada, Alabama, Georgia, Arkansas and Tennessee participated in the virtual reunion.

“We are in awe of how far you’ve gone and what all you’ve accomplished since you graduated,” said Boyd. “Your life has been a testament to the quality of education offered at Tech, and your wilingness to credit your education as a key factor in your success is one reason that your university’s reputation remains strong today.”

Oldham concluded his remarks to the Class of 1970 by sharing that in 1960, 2,800 students were enrolled at Tech. By the time the Class of 1970 graduated, enrollment had nearly doubled and 22 buildings had been constructed.