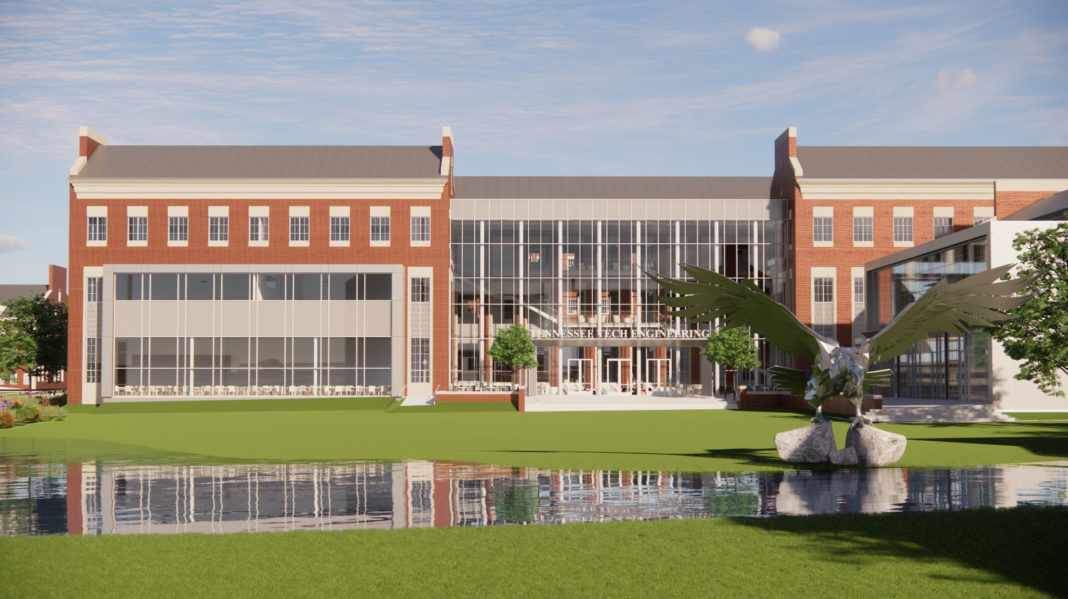 COOKEVILLE – Tennessee Tech unveiled initial designs for its new engineering building at the September meeting of the Board of Trustees.

Even though construction funding for the project was delayed as the State of Tennessee revised its 2020-2021 budget, Tech had received more than $3 million from the state in a previous fiscal year to begin planning. The building, with an estimated $57 million cost, remains the top priority for higher education construction projects, according to the Tennessee Higher Education Commission.

The new facility will be a fusion of innovation with the historic style of campus buildings, according to architect Gary Askew, featuring something for all of Tech’s engineering disciplines to promote cross-disciplinary functions throughout the buildings.

Along with the main building, there will be a student lab building for groups like Tech’s championship Baja SAE team and the award-winning Formula SAE team.

The project will also feature a new water feature, dubbed Sherlock Lake, which will add to the visual appeal of campus and also serve as an outdoor classroom for students studying environmental engineering.

During a presentation to the board, Ken Chamberlin of Upland Design Group said the project will be in a good position to be able to break ground as soon as funding from the state is available.

The board also heard an update about a new residence hall which will be located on the west side of campus, near the current intersection of Whitney Avenue and University Drive. This residence hall will combine an innovation space along with more than 300 residential spaces and has an estimated $30 million cost, which will be funded through student rental income. The initial timeline for the project has construction starting early in 2022, with completion during summer 2023. The hall would be open to residents starting that fall.

“When students finish faster, they spend less money on college and begin earning professional salaries earlier,” Oldham said. “This is important because of the positive economic impact it has for these students.”

He also shared that Tech awarded more than 2,400 degrees during the 2019-2020 academic year, including a record-number of doctoral degrees.

Oldham told the board about the Racial Diversity Task Force, headed by Rob Owens, vice president of Student Affairs, that began meeting this summer and will be releasing recommendations for actions soon.

“I continue to reemphasize our institutional commitment to diversity, racial equity, and a pervasive culture of acceptance,” Oldham said. “It is a challenging time. A historic moment. An obstacle, some would say. But I just see this as part of what we do in life. We face what comes and we make our lives and the lives of others better for it.”

Thomas Lynn, a local banking pioneer and philanthropist, has been named to the Tennessee Tech Board of Trustees by Gov. Bill Lee. He replaces Purna Saggurti, whose term expired this year. Saggurti was one of the original members appointed by then-Gov. Bill Haslam when the board was created in 2017.

A native of Cookeville, Lynn graduated with a B.S. in Management (1976) and an MBA (1979) from the College of Business at Tennessee Tech. He joined First National Bank of Tennessee in 1992, and was named Chairman of the Board in 2010, a position he still holds today.

Lynn will serve on the board’s Audit and Business Committee.

Gov. Lee also reappointed Fred Lowry and Barry Wilmore to the board. The terms of all three trustees are through 2026.

Materials from today’s meeting and the webcast of the full board meeting are available at the board’s website, www.tntech.edu/board.