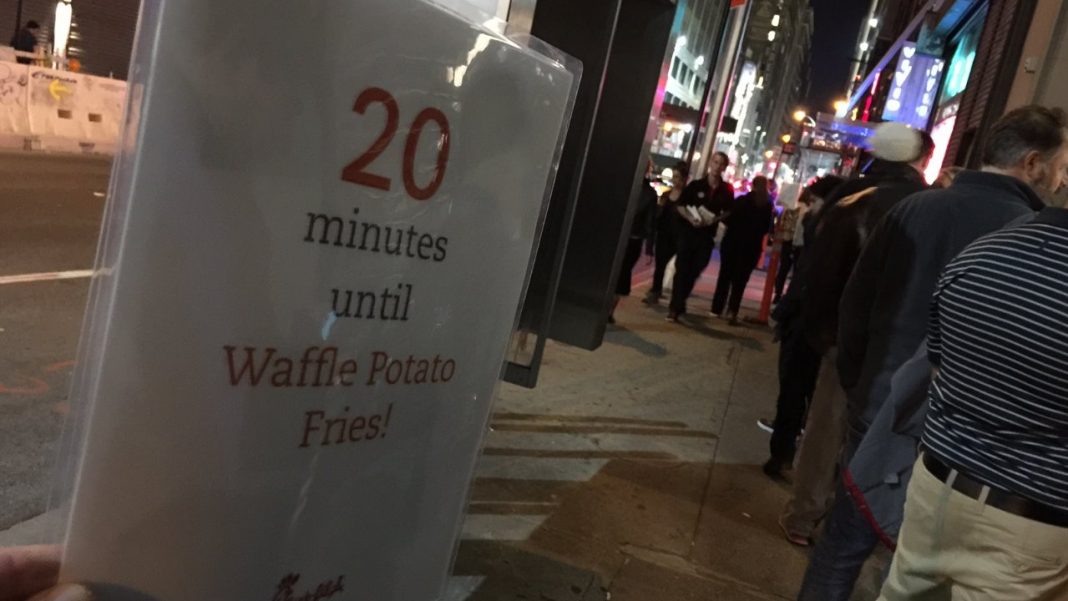 COOKEVILLE – All it takes is one good idea. Or maybe for Charles Jordan, it takes two.

The 22-year-old Tennessee Tech student has started his own business based off the latter, Wait Saver, a smartphone application/hosting system that could be a big boon for both restaurants and diners alike. But it wasn’t exactly the first business plan that popped in his head.

“I was an exercise science major, and I had originally come up with an idea of making a carbonated sports drink,” Jordan said. “I was mixing a powder with carbonated water and giving it my friends, who thought it wasn’t half bad. But a couple months later, Mountain Dew’s Kickstart comes out. I was obviously onto something, because it’s basically the same thing. I told myself the next good idea I had, I would just dive in and try to make something of it.”

He didn’t have to wait long, in fact, just a few months. Jordan was working as a host at Olive Garden when the idea behind Wait Saver arrived.

“We were pretty busy and there was a guy who had been waiting about 40 minutes or so. We paged his buzzer to let him know his table was ready. His buzzer was next to him on the bench, but he kept checking his phone instead and putting it back in his pocket,” Jordan explained. “I wondered how many times he would do that before he realized that the pager was going off. After like five minutes or so, I thought to myself, ‘It would be really cool if we could integrate those
two things.’ That was my eureka moment, when I decided that’s what I was going to work on.”

From there Jordan took several steps to move his idea forward. He formed a team of Tennessee Tech students. He sat down with professors from the university’s business department. He also met with Jeff Brown, director of The Biz Foundry, a business accelerator in Cookeville, for mentorship and advice. Brown boasts that Jordan is a “poster child” from what they’d like to see out of Tech students. Jordan says it’s more about having the right people in the right place at the right time. Since he had limited coding knowledge, he searched out a more experienced developer. It was a big find. He teamed up with Blayzer, a Web and marketing company based in St. Louis, which proved key.

“I guess I touched a nerve with them in a good way,” Jordan said. “Yes, they helped me with the production of my software, but at the same time, they also provided some serious mentorship as far as really helping me get going. It was one of those scenarios where everything started falling into place,” he added. “I definitely couldn’t have gotten anywhere without all these people.”

Wait Saver’s biggest competitor, Jordan says, is Open Table, another app that allows diners to make reservations, read restaurant reviews and earn points toward free meals. But, he argues, his app goes beyond those features. Specifically, his app allows restaurants to track seating, the inflow of guests, monitor table turnover. “They’ll be able to see how many guests are served each day,” Jordan says, “how many of those were reservations versus walk ins, they’ll receive guest satisfaction reports….It compares everything and spits it out to where they can more or less see all the hard data of their restaurant.”

For foodies, Wait Saver allows them to keep tabs on their favorite places, view wait times even before leaving the house and either submit reservations or place their name on the waiting list – and, of course, sends a notification when the table becomes available.

“It takes out the wait perception for the guests,” Jordan said. “That was the angle we went with. And even though we’re starting out with restaurants, this could work for anything you can possibly think of that might require a wait – getting your car serviced, a doctor’s appointment, getting your hair or nails done, even going to the DMV. Our end game goal is to be in all those industries, because we think it would mean a lot to our consumers.”

Production on Wait Saver wrapped in late 2014. It’s available for download, free for diners, while the sign-up fee for restaurants ranges around $650, less if they provide their own tablet or iPad. Jordan says the monthly fee depends on whether the eatery is a franchise or solo establishment.

Currently, Jordan and his team – he has roughly 22 contracted employees – are actively marketing the app. He said they are close to a deal with American Blue Ribbon Holdings, the eighth largest full service restaurant holding company in the U.S., and while that’s still in early stages, Wait Saver would be live in restaurants like O’Charley’s as soon as this summer.

“For the franchise locations, we offer a white label or premium service, to where it’s their branding – these locations get a ton more,” he said. “We’ve been working really hard with a couple different franchises,” he added. “We figured franchises would benefit more than your mom and pop restaurant, although we do cater to those people as well.”

As for what’s next? For now, Jordan says, college is on hold. He’s taking the semester off to focus on the business; giving it his undivided attention. And if you’re also a young student looking for a word of advice, that’s what he’ll probably tell you.