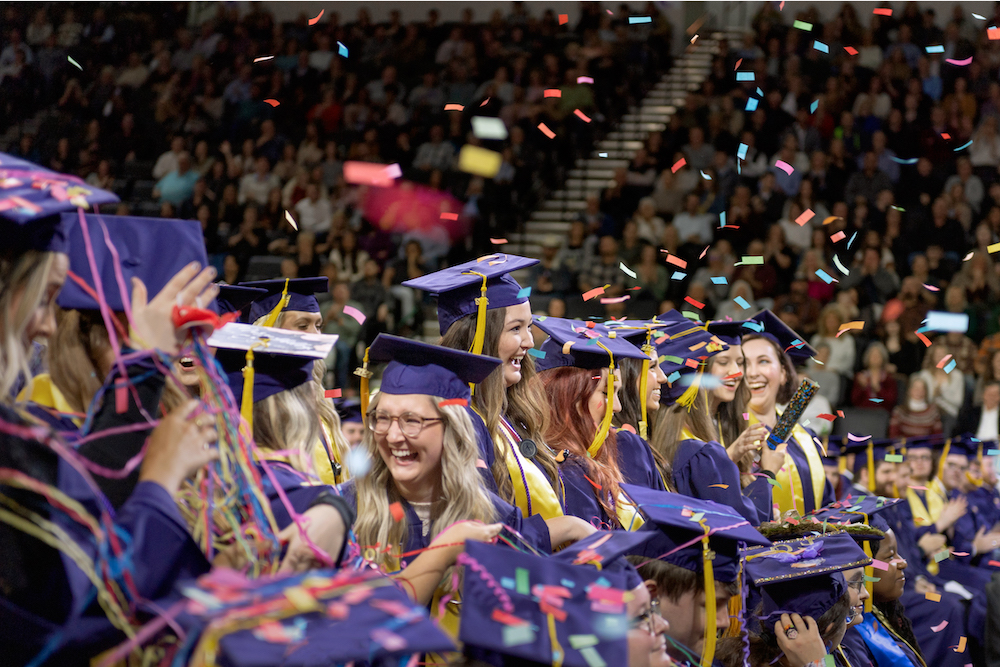 Cookeville – When Jennifer Duggin of Woodbury walked across the stage at Tennessee Tech University’s graduation ceremony on Friday, Dec. 9, she accepted her diploma knowing that she is finishing a journey she has been dreaming of completing for about 27 years. Duggin completed her bachelor’s degree in interdisciplinary studies with a minor in criminal justice and psychology at the age of 49, with plans to earn her master’s by the time she is 50.

She was among the more than 865 graduates earning degrees in Tech’s fall commencement with birth dates ranging from 1957 to 2003, evidence that an education at Tech can be for everyone, regardless of age.

“Going to college was something I had always wanted to do,” she said, “Go to college, move out of Woodbury and see the world. Instead, I took a couple wrong turns and a few detours before I got back on track. I am thankful that God allows U-turns, because even though I made a few wrong turns, I did not miss the opportunity to make a U-turn and go in the right direction.”

Duggin was among speakers who delivered video messages to graduates at a morning and an afternoon ceremony held in the Hooper Eblen Center.

Duggin joined the military her junior year of high school and completed her training after her high school graduation in 1992. After that, she joined the Tennessee Army National Guard, where she currently still serves as a fueler, working to fuel helicopters on an aviation unit. She was deployed to Iraq between 2009 and 2010 and is currently on active duty as a readiness noncommissioned officer.

In addition to her dedication to the military, several other life factors slowed her ability to go to college, including marriage, children and just the bumps and bruises of everyday life.

“I was often told that I ‘messed up’ and I would never do what I said when I was younger,” Duggin said. “This college journey started out to prove them wrong but, in the end, it was about me following my dreams and checking of the bucket list, one box at a time.”

Duggin started thinking about college again after her youngest son and “bonus son” started studying at Tennessee Tech in 2018. Once she decided to head to Tech herself, because she had criminal justice credits from her career in the military, her advisor Ashlee Kiser encouraged her to pursue interdisciplinary studies with a concentration in psychology. Because she is on the fast track to get her master’s, she plans to be able to hang both diplomas on her wall by the time she turns 50. She will be a first-generation college graduate.

“With the support of my husband, children and friends, I knew this was the time,” she said. “Once I realized how bad I wanted to do this and do it for me now and not anyone else, nothing was going to stop me.”

Getting to this milestone took a lot of support from the sidelines. Duggin thanks her advisor Kiser, along with Luke Notman, Mary McCaskey and Charmian Leong in Veteran’s Affairs, as well as her husband, all their children and their families for being there to guide her and cheer her on along the way.

“Life can be hard and there really is no order that you must do things; just make sure you do them,” Duggin said. “Remember your why and remember your worth. A college degree and all the knowledge that comes with it can never be taken from you. If you make a wrong turn or take a small detour, just remember ‘God Allows U-turns’ and gives us the chance to get back on track.”

The university also posthumously awarded a Bachelor of Science degree in interdisciplinary studies to Michael Wesley Flatt during the afternoon ceremony. Flatt passed away in 2019 at the age of 70 and had earned more than 200 college credit hours, but never completed a degree. He was a graduate of the class of 1966 from Central High School and served in the military. He did two tours in Vietnam with the U.S. Army. He received a purple heart and a bronze star. Flatt’s son William Wesley Flatt accepted the degree on behalf of the family.