The Nashville Predators Craft Beer Fest is an event held annually in June featuring 80 breweries, including commercial breweries like Budweiser and Coors, and Tennessee craft breweries.

“It’s a huge event,” said Jim Helton, Red Silo co-owner and head brewer. “The whole concourse upstairs has all the corporate breweries, so people are walking the concourse. Then, they come down the steps and walk the floor for all the local craft.”

Red Silo was placed just inside the entrance to the floor, beside White County’s Calfkiller Brewing Company and Black Abbey. Red Silo featured approximately eight varieties of their beer. They also featured a collaboration beer that they prepared with Calfkiller and Black Abbey, where they each did the same beer and added their own yeast to make it different.

“That was a big hit,” said Helton, speaking of the collaboration beer.

Festival patrons were encouraged to go online and vote for their favorite beers and breweries during the event.

“We ended up winning and Calfkiller was second and Turtle Anarchy was third,” said Helton.

2019 was Red Silo’s third trip to the acclaimed beer festival.

“Elijah (Thomen) went three years ago for our first event, and he placed second,” reflected Helton. “Then he went back two years ago and won it and got that guitar. He was unavailable last year, so Mark (Vanderbleek) and I took over.”

Red Silo is truly a team effort with Helton, Thomen and Vanderbleek sharing in the brewing and marketing efforts.

“It’s absolutely a team effort,” said Helton. “The fans are great and it’s a good fundraiser for the Preds.”

The new guitar trophy has joined the first one on the wall above the bar, and Red Silo looks forward to competing again. 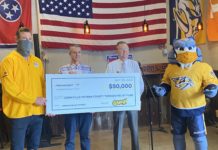 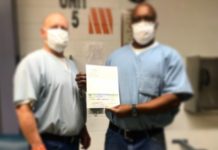