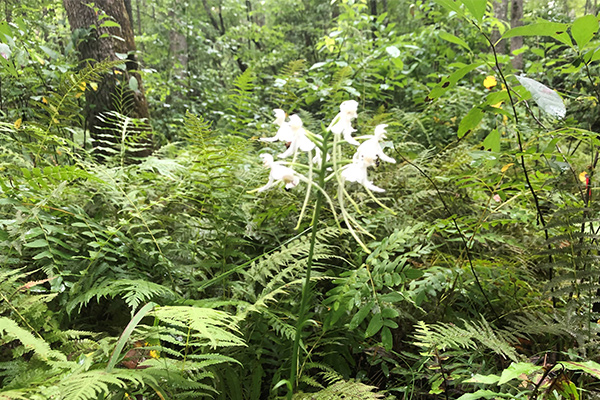 White fringeless orchids — a threatened species — were given a new lease on life on a TVA power line right of way earlier this year. When scientists paid a recent visit to the site, they found flowers blooming.

SPARTA — On Wednesday, a team of academics and state and federal biologists checked in on hundreds of rare white fringeless orchids that were transplanted to a remote location in the Bridgestone – Firestone Wildlife Management Area this spring.

“The Cumberland Plateau is a stronghold for these rare, beautiful flowers and we are working to protect them,” said Tennessee Valley Authority botanist Adam Dattilo. “In August this species of orchid produces a single baseball-size cluster of white flowers, and we are hoping to see signs of growth in our test areas.”

Dattilo explained this species is listed as threatened under the Endangered Species Act. The orchids planted at Bridgestone were originally discovered in 2015 on TVA power line right of way that has been retired near Spencer. Dattilo needed to find a suitable habitat because as the right of way reverts to its natural state, the orchids would die as other plants grew in.

To move the plants to Bridgestone, TVA helped assemble a large conservation team including Atlanta Botanical Garden, Tennessee Wildlife Resources Agency, Tennessee Department of Conservation and Environment, US Fish and Wildlife Service and researchers at the University of Tennessee, Chattanooga.

“We used TDEC’s habitat model to help identify several possible introduction locations for the orchids. Bridgestone turned out to be the best,” said Geoff Call, USFWS endangered species recovery coordinator in Tennessee. “While we were looking for the best spot on protected lands, experts at the Atlanta Botanical Garden grew the white fringeless orchids in their specialized nursery.”

During this field survey, Call and the team carefully searched for a single 4- to 6-inch thin green blade-shaped leaf or tell tail white flower cluster atop of a two-foot stem. “It’s like looking for a needle in a hay stack because you’re looking for a small green leaf in the sea of thick green ferns,” Call said.

Determined, the team found over 100 plants and nearly 20 flowering plants of the 400 they planted this spring.

Call is pleased with what he saw. But, the researcher in him is cautious not to say this a success.

“Restoring species can take decades,” said Call. “We will monitor this site for many more years to see if the orchids get established.”

Researchers plan to visit this area next year to collect more data. Then they’ll determine a schedule to visit the site every few years.

“From a research standpoint, what we learn from the Bridgestone site will be of enormous value to conservation of this orchid,” Dattilo said. “I just can’t express enough how important it is to have so many conservation groups in the state working together on this project.”