COOKEVILLE – Colorobbia USA has announced it will be the newest tenant of the Highlands Business Park, investing $5 million to establish operations – including a 50,000-square-foot facility – in Cookeville.

Local and state top brass were on hand for the announcement Tuesday morning regarding “Project Orlando,” at the site of the future home of the ceramics supplier.

Colorobbia USA is part of Gruppo Colorobbia, an Italian company and global leader in the ceramic and glass industries. Established in 1921, Gruppo Colorobbia is a family-owned company headquartered in the province of Vinci, Italy. The company employs more than 2,000 individuals and operates in 18 countries and plans to employ approximately 30 employees at the Cookeville facility.

“This is the type of company we envisioned when the city and county partnered together for the business park,” Cookeville-Putnam County Chamber CEO George Halford told the UCBJ. “This is our bread and butter; these small- to medium-size companies.”

Gruppo Colorobbia’s product offerings include glazes, frits, pigments and ceramic inks for the ceramic tile and glass industries. The company also produces precious metals and a line of products for artistic ceramics.

At the Cookeville facility, the company will work alongside regional tile manufacturers to produce these pigments and glazes for their products. This location will also allow the company to streamline synergies between Italy, Mexico, Spain and the US.

The geographical location was key in the decision-making behind choosing Cookeville. Colorobbia already works with tile manufacturers in Clarksville, Crossville, Lebanon and beyond; making Cookeville a natural fit for their US base. Combined with the close proximity to Tennessee Tech University, whose technology-driven student and alumni base will likely fill many of the company’s future positions, Colorobbia officials are satisfied with their choice.

“This was one of the factors in deciding to choose Cookeville,” Arturo Salazar, president of Colorobbia USA, told the UCBJ. 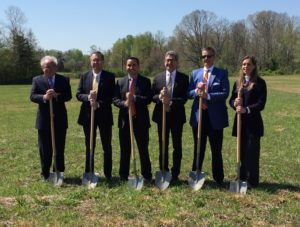 With this being the company’s first stateside location, it was a lengthy process to complete the paperwork to establish a US-based branch of the company and clear the planning and development hurdles to help the company bring its new venture to fruition.

It began at an exposition event in Orlando, Fla., Salazar says; likely the origin for the project’s code name throughout the discussions. With Tennessee on the company’s radar, they reviewed several available sites across the state.

“But then we decided Cookeville was the right place for us,” he said.

This partnership with Colorobbia, Halford says, continues to open the area to more opportunities and further growth. “It’s telling people that we can compete on an international level; we already are competing,” he said, citing the area’s recent micropolitan rankings. “Things are really going well.”

About the Highlands Business Park:

The Highlands Business Park is already home to automotive manufacturer Ficosa North America and the one-megawatt solar energy system known as Highlands Solar Park; though the solar park isn’t technically an employer. Academy Sports + Outdoors’ 1.6 million-square-foot distribution facility is nearby but just outside of the official park’s borders. Local banking software developer Oculus Software has also expressed interest in locating its operations there.

“Cookeville is proud to be the new home of Gruppo Colorobbia’s U.S. operations and we look forward to a long and prosperous partnership,” said Cookeville Mayor Ricky Shelton in a statement. “Gruppo Colorobbia’s long history of quality products, commitment to research and development, and a vision for the future of the industry exemplifies everything we hope to see in the Highlands Business Park.”

“This is yet another example of the success of our leadership team to always be moving our community forward,” he added.

“For Putnam County to be picked as the first location (for Colorobbia) in the United States, it’s great,” said Putnam County Executive Randy Porter. “It just shows how great our community is doing and how we’re attracting international companies.”

City and county officials praised the work and efforts of the members of local economic development groups for their involvement throughout the process.

Salazar estimates dirt could begin moving at the site as early as next month and, while no official completion date has been announced, he hopes the facility will be ready in early 2019.