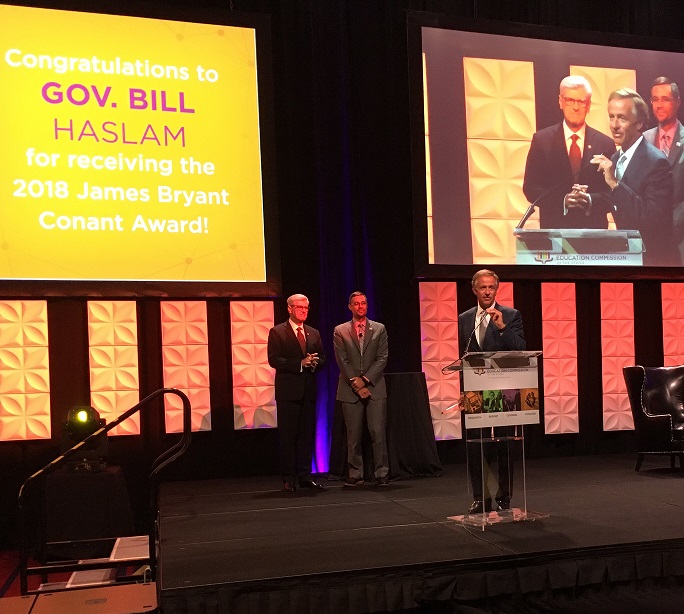 The Education Commission of the States Recognizes Gov. Bill Haslam and the SAILS Program

WASHINGTON, D.C. – Tennessee was honored this week with two national awards for education innovation from the Education Commission of the States at its annual National Forum on Education Policy in Washington, D.C.

Haslam was awarded the James Bryant Conant Award for his work on bridging K-12 education to higher education to the workforce. During the Haslam administration, Tennessee has been one of the fastest-improving states in the nation for K-12 education, and high school graduation rates are at a record high.

In 2013, Haslam launched the Drive to 55 initiative with the mission of increasing the number of Tennesseans with a postsecondary degree or credential to 55 percent by the year 2025. Since its launch, the state has seen its attainment number increase by 7.4 percentage points.

Among the signature programs of the Drive to 55 are the Tennessee Promise and Tennessee Reconnect scholarships which offer tuition-free community and technical college to recent high school graduates and adult learners in Tennessee.

More than 50,000 high school graduates have enrolled in college through Tennessee Promise since 2015. The Tennessee Reconnect program for adult learners will begin enrolling students in fall 2018 and more than 21,000 adults have applied for the scholarship.

The program has seen an 89 percent success rate in preparing students for college-level math and more than 66,000 Tennessee students have participated in SAILS since it launched in 2012. During that time, the number of first-time freshmen requiring learning support in math at Tennessee’s community colleges has decreased 12.8 percentage points. 51,000 students no longer need math remediation because of SAILS. The program is part of Governor Haslam’s Drive to 55 initiative.

For more information on the awards and the Education Commission of the States, visit www.ecs.org.