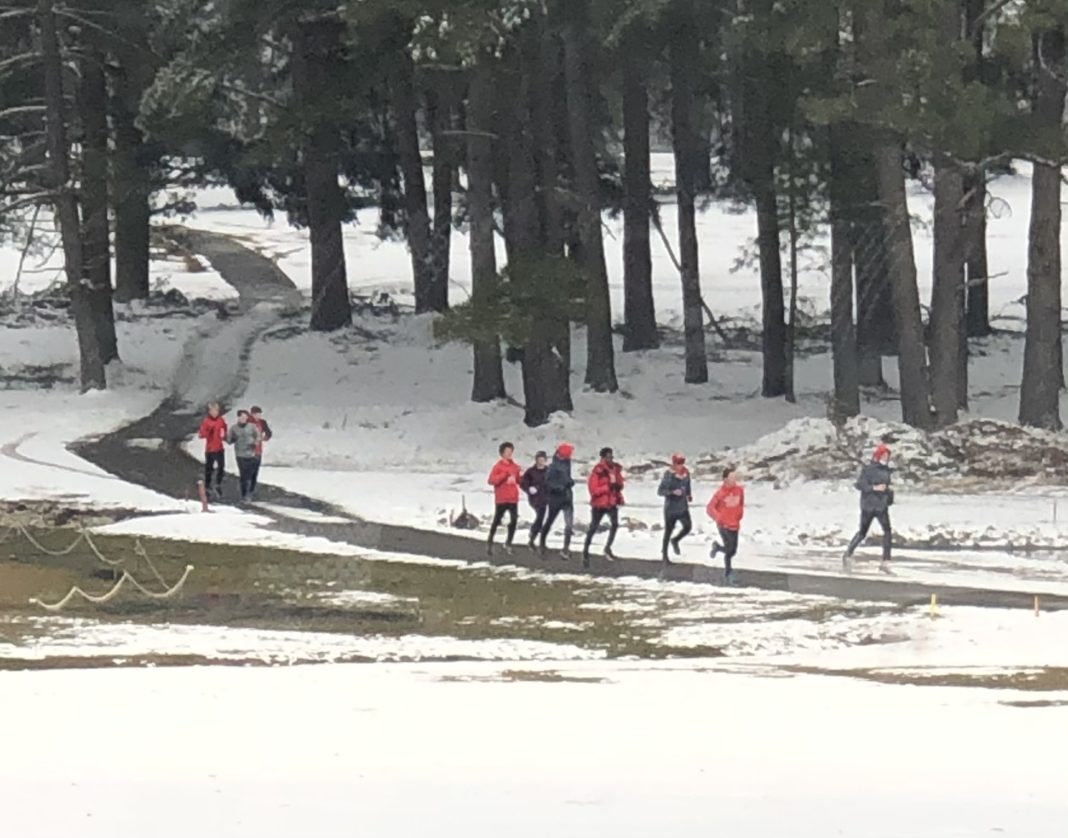 TTU Cross Country teams had planned to wrap up their season at the Putnam County Sports Complex, but Coach Peter Dalton received a call around lunch time on Thursday informing him that they could not host Friday’s scheduled race due to liability issues. With five other teams already in route to Cookeville, a new race course had to be found and quickly.

With the massive power outages the area was facing, combined with the snow, limiting the options for alternate sites, they began to look at Tech’s own Golden Eagle Golf Club.

“Our facilities staff at Tennessee Tech, led by our fantastic athletic director, Mark Wilson, and the head of our facilities, Matt Dexter, put their heads together and said let’s get out there,” Dalton said.

Dalton ran the course a couple of times to determine the distance needed, and then it was off to Lowe’s for flags to stake out the course.

“There was quite a bit of water on the course, so we were avoiding some areas and running on other areas,” Dalton shared.

They managed to create the course in less than 18 hours, a feat Dalton said was unheard of.

“It’s funny because we put the course together so quickly, but we got a ton of positive feedback from athletes and the coaches of the visiting teams,” Dalton said. “I think we are going to look into hosting more meets out there during the regular season which is the fall.”

Running a race in the snow is not the norm but became a possibility when the cross country season was moved from fall to winter due to COVID-19.

“I understand that running a cross country race in the snow might seem extreme to some people, but in the northern states, like Michigan, Wisconsin, upper New York and Pennsylvania, they run cross country in the snow most times. To not run in the snow up there is the exception,” said Dalton, adding that all the coaches loved it.

The race was so successful that Dalton said they are planning to make it an annual event in October of each year at the golf club.

This wasn’t the first time the athletes had ventured onto the Golden Eagle Golf Club though.

“There’s a bit of an age-old battle with cross country athletes sneaking on to some golf courses to try to get on the soft surface, but we try to stay out of the way,” said Dalton. “We go earlier or late with permission of our Golden Eagle Golf Course. The grass is kept nice, and we stay off of hard surfaces. The main thing is keeping our athletes out of traffic. Of course, the soft surfaces are better, but being out on the golf course you aren’t worried about vehicles, people on their phones and people playing with radios while they are passing your athletes. That’s a big thing.”

The Golden Eagles will wrap up the 2020-21 campaign at the Ohio Valley Conference Championships on March 1 in Clarksville, Tenn.