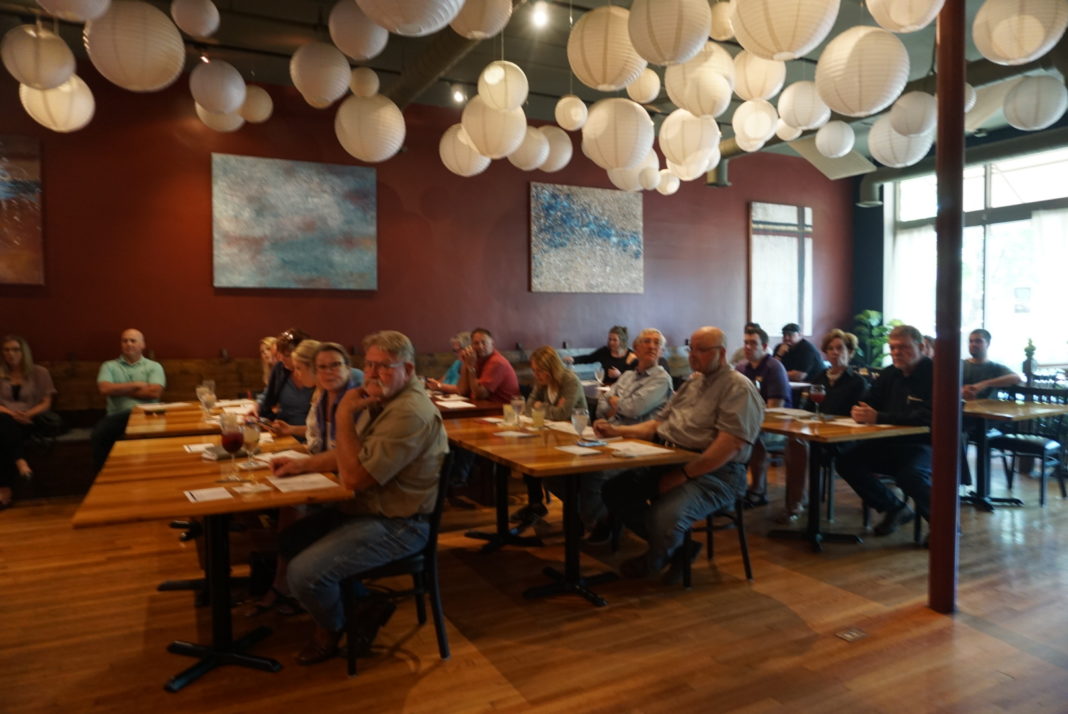 COOKEVILLE – Foodies came to Cookeville from far and near last week for the final opportunity east of the Mississippi to become Licensed to E.A.T.™before the World Food Championships (WFC) held in Dallas this October. As an added bonus, participants were able to see the results of a professional culinary competition as four local chefs battled for a “Golden Ticket” to compete in this year’s WFC event.

Not long after its debut in 2012, the WFC established a standardized judging methodology to help maintain consistency across all contests. This Licensed to E.A.T.™ certification allows prospective judges to register for an opportunity to judge at the WFC main event or other regional competitions.

Several of this year’s class participants were already certified judges for other culinary organizations. Four were Kansas City Barbeque Society (KCBS) judges that wanted to broaden their culinary opportunities.

Joe Manlongat, one of the KCBS judges attending, judged at the WFC when it was held in Las Vegas in the first few years before the E.A.T. Certification was required.

Manlongat had been waiting for an E.A.T.™ class to be offered close to his home in Ontario, Canada. After waiting for four years, he made the commitment to come to Cookeville for the certification class, and he recruited his friend and fellow KCBS judge, Rob Wilson, to join him.

The judging classroom experience was hosted by the President and CEO of WFC, Mike McCloud, who walked participants through the E.A.T.™ Methodology and gave them an in-depth look into the unique culinary world of Food Sport. New judges also sampled and mock judged appetizers prepared by WFC Ambassador and 2015 World Chef Champion Thaddeus Combs.

While the attendees were learning about WFC judging, four local professional cooks, Kristen Moser, Greg Vaden, Steve Ford, and Jason Gooch, were competing for one of the coveted golden tickets that guaranteed free entry into October’s main competition in Dallas.

Each chef was given a 30-minute window to prepare a signature dish for a panel of three already certified judges to evaluate and score. Judges for the event were Darrell Jennings, Bettye Vaden and Gary Luhn, with Randy Todd serving as table captain.

Although some of the scores were close, the winner of the golden ticket was Jason Gooch, who prepared chargrilled pork tenderloin with a coffee glaze, pepperjack stoneground grits and wilted spinach.

Combs was impressed with the abilities of the three other chefs, so he awarded each with a “discretionary ticket” to attend WFC and, consequently, formed the first ever Cookeville team. Cookeville chefs Alane Boyd and Tiffany Zellner, also competing at WFC, will complete the Cookeville team.

No matter who’s doing the cooking, the judges are the ultimate winners, getting to sample quality food dishes while helping determine food champions. There are many reasons judges sign on to food sport.

“So, it’s variations like that and seeing different walks of life. I met a ton of people over the three years that I did them, literally everyone from a homemaker right up to a red star chef.”

Manlongat said he has made vacations out of flying from Ontario to Las Vegas to judge at WFC in the past. He also judges across the country for the KCBS and Steak Cookoff Association.

Another couple attending from out of state, Rhea and Mark Vogelhut of Banner Elk, NC, are KCBS judges and wanted to go to Dallas to experience WFC.