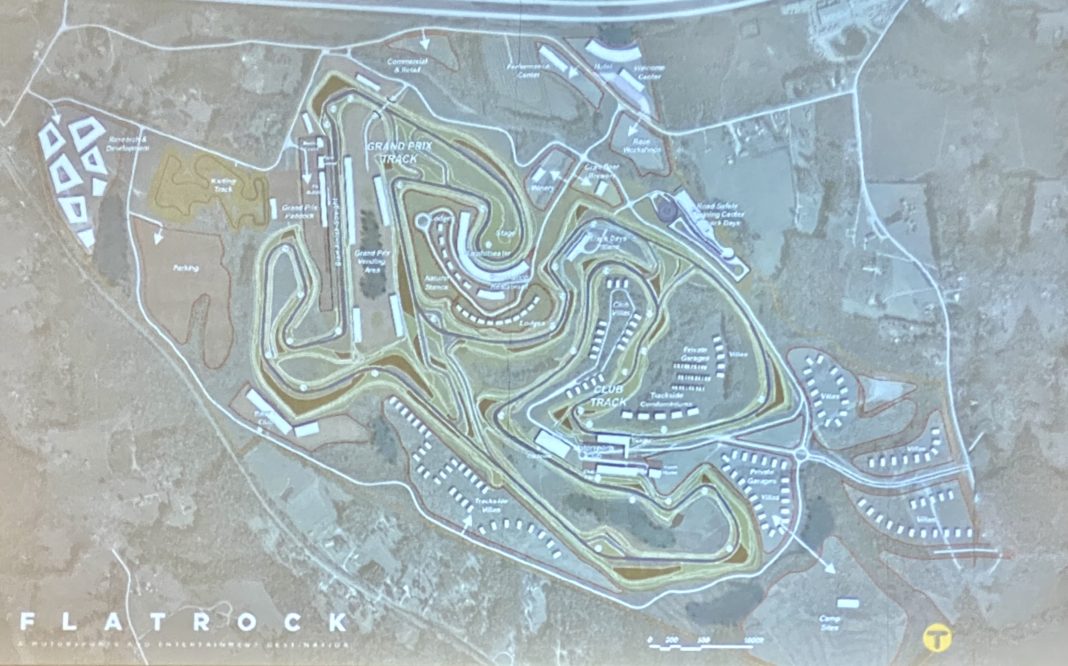 CROSSVILLE – Will Cumberland County become Tennessee’s next big tourist mecca? That is exactly what developers have planned for property that was recently purchased from the Plateau Partnership Park.

Rusty Bittle, developer and founding partner of Flatrock USA, is behind the ambitious plan, which will include a six-mile paved road-racing track, two hotels, a lodge, restaurants, clubhouses, cabins, an amphitheater, winery and more on a 773-acre site off the Westel Road exit. He unveiled the plan Monday night for Cumberland County Commissioners and area residents.

The project is being designed by world-renowned Tilke Engineers & Architects, the world’s leading designer for motorsports venues/research/development test facilities. In a first for Tilke, they were given a piece of land to first design a major road track, after which the developers then designed a large-scale amenities complex around it. According to Tilke, the natural terrain and elevation of the property allowed them to design a track unlike any other in the world.

“Flat tracks are boring. They just don’t challenge as much,” said Bittle. “We have the opportunity here to have what they feel like will be a (top 5) track in the world. I do feel like this will be the number one track in the North America region.”

The track can be designed into eight different tracks, including one for a grand prix race. There will also be tracks/areas for carting, motorcycles, formula drift, off-road and rally, with the layout even big enough for four events to be run concurrently. A driver education center with skid pad is also planned.

An automotive innovation center is planned for the site in collaboration with Oak Ridge National Lab, which is the largest automotive research facility in the world. The lab works with almost all the OEM automotive manufacturers and is actively researching advanced charging technologies for the industry. There are not a lot of places available to physically test these innovations in the U.S., so the lab has been in talks with Flatrock about having a dedicated research facility for OEMs to do R&D and use the testing tracks.

“The biggest thing I would like people to understand is that this is not just a racetrack,” Bittle said. “We want people to come to Flatrock and enjoy experiences other than just getting on the track — whether it’s dining, camping, whatever it may be. And we want to make sure they are abundant. We have a long list of things we would like to incorporate into Flatrock as far as amenities.”

A farm-to-table destination restaurant is planned, with food and livestock grown on site. A winery, brewery and distillery will be on site to add to the ambiance.

Bittle also pointed out that the developers plan a focus on keeping items locally sourced. Local artisans will be encouraged to demonstrate their crafts and sell their wares, for example.

On the lodging side of things, a wide range of venues are in the plan as well, including two hotels, a lodge, glamping areas, camping, tiny homes, RV hookups and motorcoach hookups.

“We’ve talked about having balloon festivals, having fireworks a couple of times a year, having cook-offs – from chili cook-offs to barbecue events — things that the community can come in and just enjoy if they don’t want to participate in racing,” Bittle said.

Conference space, meeting facilities, wedding sites and a private clubhouse for members are all planned for the site.

An economic impact of $93 million is anticipated for the first five years, according to an impact statement that was prepared for the racing track alone. Two to three hundred drivers are expected to visit the track weekly, but Bittle assured area residents that traffic would not be a concern with drivers arriving sporadically from 8 a.m. to early afternoon.

More information will be released about Flatrock in early 2022.