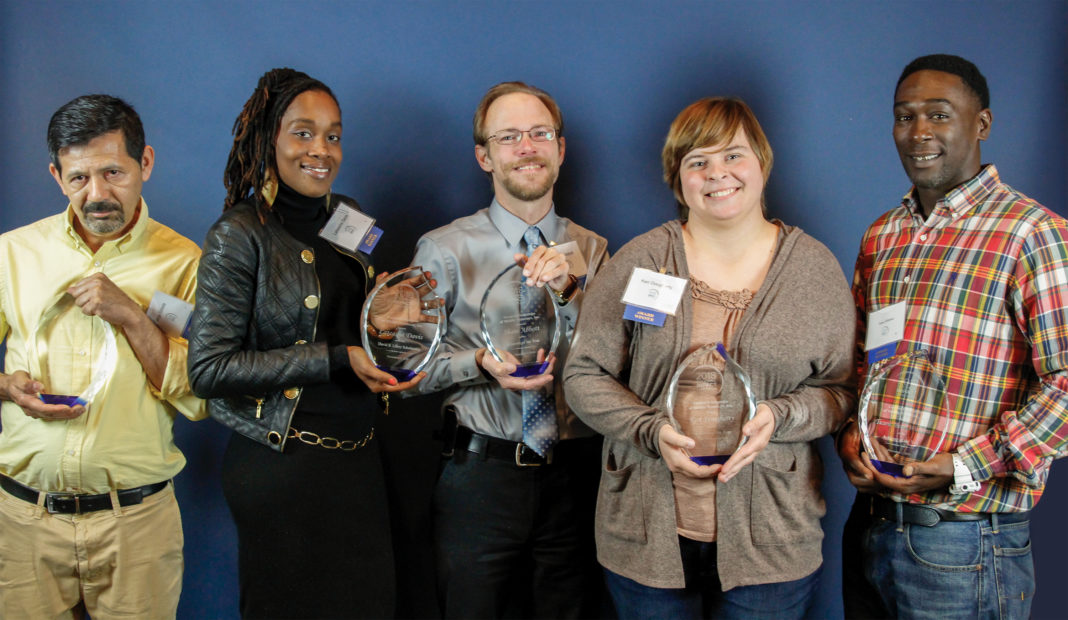 NASHVILLE — A man recovering from a near-fatal illness, a young woman with autism and a man trying to find his way after years in prison were among people whose inspiring stories of achievement were celebrated during Goodwill Industries of Middle Tennessee’s Impact Luncheon awards ceremony in Nashville Thursday.

Outstanding Goodwill employees, Career Solutions clients and community partners were recognized during the event at the Music City Center. The luncheon was sponsored by American Paper & Twine.

The nonprofit also honored a 20-year employee, senior director of operations Mike Eisenbraun, with the Pioneeer Award for outstanding service to Goodwill’s mission of changing lives through education, training and employment.

Achievers of the Year

The recipients of this award have achieved great success since being hired by Goodwill. 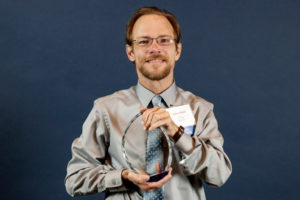 Shane Abbott came into the world with the deck stacked against him. From birth, cerebral palsy made use of his left arm and leg difficult, and he developed other medical issues. He needed physical therapy until he was 16. But Abbott was determined to make his own way in the world. He worked for more than a decade at department stores until losing his job in 2009. He was out of work until 2017 when, he says, he began to want more out of life. He applied for a job at the Goodwill store in Cookeville. At first, the single father of two processed donations, but his supervisor saw potential in Abbott’s customer service skills and moved him to the cash register. Abbott works hard to make every customer smile, and when he is not on duty, customers ask about him. He says the job has helped him regain his confidence, and his family is proud of his progress.

When Keri Dougherty began working at the Donation Express Center in Paris, Tenn., in June of 2016, it was her first real job. Keri’s aunt and uncle hoped the job would help her mature and become more independent. But Keri has autism, and communication has not always been her strong suit. She initially struggled with some tasks, such as remembering where to put different donated items after sorting them, and she lacked confidence, particularly about interacting with donors. Keri’s supervisor helped her develop a “mental script” for those interactions — greeting the donor, collecting their items, handing them a donation receipt and thanking them. Keri’s work experiences have improved her ability to navigate social situations, and her confidence has grown. Today, Keri loves her job and being part of Goodwill’s mission of changing lives through education, training and employment. She recently bought a car with the pay she earned from Goodwill, and she is on a waiting list for her own apartment.

Some people need many second chances in life. Ticaric “Bear” Williams needed only one. After Williams went to prison, he was determined to make a change. But when he got out in January of 2009, he was 34. He had never had a real job. After months of submitting applications, Williams couldn’t find an employer who would give him a chance. He went to Goodwill Career Solutions, took job readiness classes and applied for a position with Goodwill in downtown Nashville. He was initially hired to process donations, which he did for two years. Then he took Goodwill’s forklift classes and was promoted to tow-motor operator, a job he held for four years before deciding he wanted to drive trucks. He first earned an advanced license to drive box trucks, and then went to school to earn a full commercial driver’s license. He now drives tractor-trailer rigs for Goodwill. “I love the life I have now,” he says.

This annual scholarship, named for Goodwill’s past president who served four decades, is presented to a Goodwill training program graduate who plans to enroll in post-secondary education or a credentialed certification program.

Lateasha Davis, a 29-year-old mother of five, is a tomboy who loves working with her hands. But while her position as a housekeeping supervisor paid the bills, it had become boring and repetitive. She yearned for something that would challenge her — a job that would allow her to start over and build a more rewarding future for herself and her kids. At a Goodwill-hosted job fair, she learned about Goodwill’s Construction Training Program. Students attend classes five days a week for six weeks. They learn safety, construction math, the use of hand and power tools, how to read blueprints, budgeting and much more. They also receive a stipend. In January, Lateasha took the plunge and entered the program. She worked hard and excelled at all subjects. Soon after graduation, she was hired by Messer Construction and put to work helping build a Family Justice Center at Metro Nashville Police Department’s new administrative headquarters. Lateasha plans to take college business courses to pursue her ultimate goal of owning a home-cleaning service that also does repairs.

This award is named in honor of two women who were loyal supporters of Goodwill, Madaleine LaVoi and Elsine Katz. The award is given to a Career Solutions client who has made outstanding progress in their program at Goodwill.

When Jorge Estrada left Honduras for Texas in 2000, he left behind a girlfriend, whom he hoped to marry, and a small business making chairs. His plan was to work in construction for several years, then return to his home country. But the 26-year-old was stricken with a near-fatal brain infection. His sister had him moved to a hospital in Nashville near her home. He was hospitalized for 45 days, and then he began a prolonged and difficult recovery. He had to learn to eat, to talk, to stand and eventually to walk again. Meanwhile, he lost his girlfriend, his business and his ability to live independently. But Estrada had a loving family and an unshakeable will to get a little better each day. In 2004, he finally felt strong enough to apply for a job. He found one at Goodwill. Fourteen years later, Estrada still works for Goodwill, stocking merchandise on the sales floor of its Madison store. He has made tremendous strides, mentally and physically. He bought a car and drives himself to work. “Now, because I have a job, I have a life,” he said.

These are organizations that have significantly contributed to Goodwill’s mission of providing jobs and job services to those who struggle to find work.

Donor Partner of the Year Award

BLVD Estate Sales has partnered with Goodwill for several years, recommending that its clients donate the household goods, furniture and clothing remaining after estate sales to Goodwill. In 2018 alone, the company’s clients have filled more than 20 trucks with high-quality donated items.

Community Partner of the Year Award

For several years, Centerstone Career Connect, a Department of Labor funded-program awarded to Centerstone of Tennessee, has worked with Goodwill to assist youth ages 18-24 who have a criminal background. The agencies have held several events, including an expungement clinic with General Sessions Court in Nashville to help youth get criminal charges removed from their record and a community resource fair.

Volunteer of the Year Award

Earlier this year,Googleannounced a $300,000 grant for Goodwill Industries of Middle Tennessee to incorporate more digital skills trainings for Goodwill employees and Goodwill Career Solutions clients into its workforce development programs. The grant is expected to serve more than 8,000 people over three years. Google employees have since volunteered to conduct seminars for job-seekers at Goodwill, train Goodwill staff to hold classes on Google digital tools and worked to optimize Goodwill’s website.

Goodwill Ambassador of the Year

Audrey Rhodes is a fashion and thrift blogger living in Nashville who has a passion for Goodwill’s inexpensive shopping opportunities and its mission. Known to her many fansas Affectionately, Audrey, Rhodes frequently writes about — and posts photos of — her Goodwill finds. She has participated in several Goodwill fashion events, has appeared on TV to discuss Goodwill and conducted a seminar at Cumberland University on dressing for success in the workplace inexpensively by shopping at Goodwill.

Hytch LLC, a Nashville-based social impact technology company, presented Goodwill with a donation of $5,000 to fund cash rewards for Goodwill employees who commute together to work and use the Hytch Rewards app to log their rides.

For 60 years, Goodwill Industries of Middle Tennessee has provided job training and job placement free of charge to people with disabilities or other barriers to employment through the sale of donated items. Goodwill’s vision is that all people will have the opportunity to reach their fullest potential through the power of work. More information about Goodwill’s Career Solutions, retail stores and donation centers can be obtained online at www.giveit2goodwill.orgor by calling 1-800-545-9231.