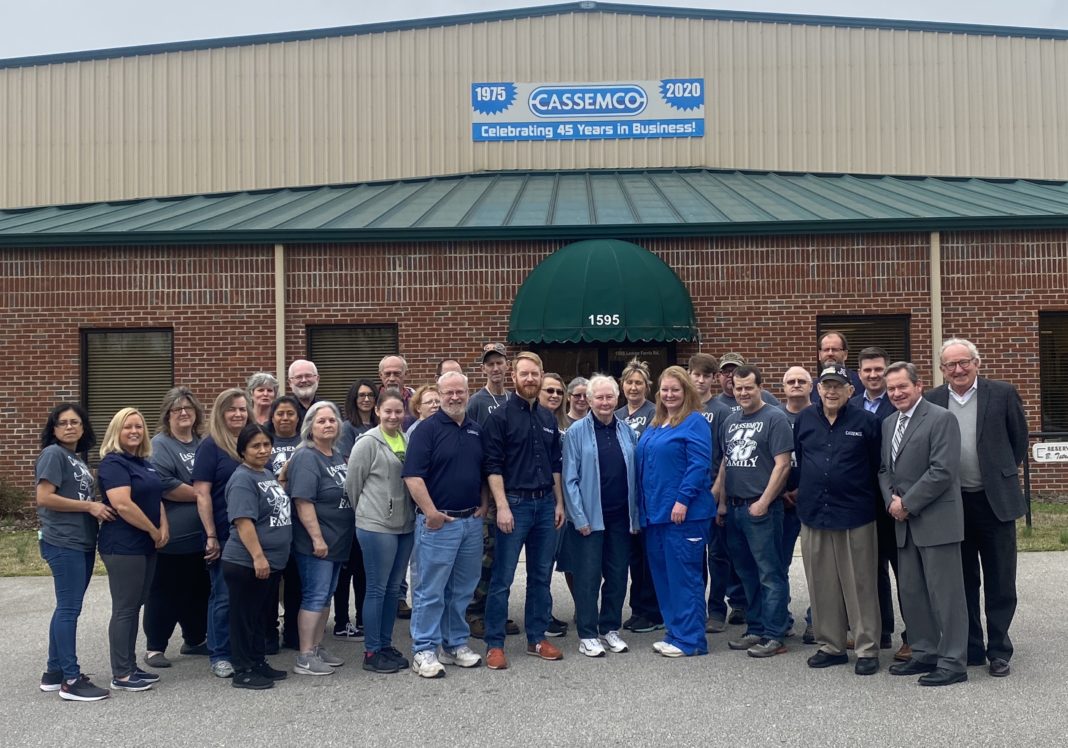 Cassemco CEO Barbara Tetreault was presented with a proclamation from the state of Tennessee congratulating the company on its 45 years in business.

“We survived a lot in our 45 years of business,” said Tetreault. “It takes a lot of courage to operate a company because you do have your ups and downs, but we have such a good group of people right now, some of them have been here a long time, Jerry my general manager. I’m really proud of my son, John, and what he’s contributed to the business. I’m proud my daughter, Katherine, was able to be here today.”

Putnam County Mayor Randy Porter was unable to attend the event but issued the following statement, “So proud of Cassemco on their 45th Anniversary. They’ve been a great local company of ours, an iconic business that has been great for Putnam County. We’re so proud of them. I’m so sorry I couldn’t be there for the celebration, but I had to tend to the tornado recovery and cleanup. I wish them the best and say thank you on behalf of Putnam County for being here 45 years and continuing to be a great part of our county.”

Cassemco’s story is an interesting story of adapting to the market and current trends.

In January 1975, Cassemco started production in Cookeville, focusing on sewing chin straps for helmets. The company founder, Leonard Nipper, was concerned about the safety of football players, so he began expanding the product line to focus on a variety of sports products he developed related to safety, including shoulder pads, thigh pads, etc.

“We did some molding, and a lot of it was his designs and his interpretations on making it a safer sport,” said John Nipper, son of Leonard Nipper and the current Cassemco president.

The company’s vast experience in foam next led them into the medical industry, producing products for Deroyal.

“We were kind of at the right time understanding the foam fabrication part of it to get into making foam for surgeries,” said Nipper.

Tetreault’s influence on the business has dramatically influenced its cleanliness and safety records.

“My mom wanted a very clean facility that could produce these parts because unlike a lot of foam that gets covered as a cushion, it gets exposed,” said Nipper. “They take it right out of the bag, and they may immobilize one of your limbs during surgery. These are fairly standard positioners.”

Most of Cassemco’s products are flexible foam positioners that are used by surgeons to position a patient’s body in the correct position to perform major surgery. The company currently produces 30-50 different positioners for several medical companies.

Other major industries served by Cassemco include automotive and marine seating and interior trim, consumer and household products and packaging materials.