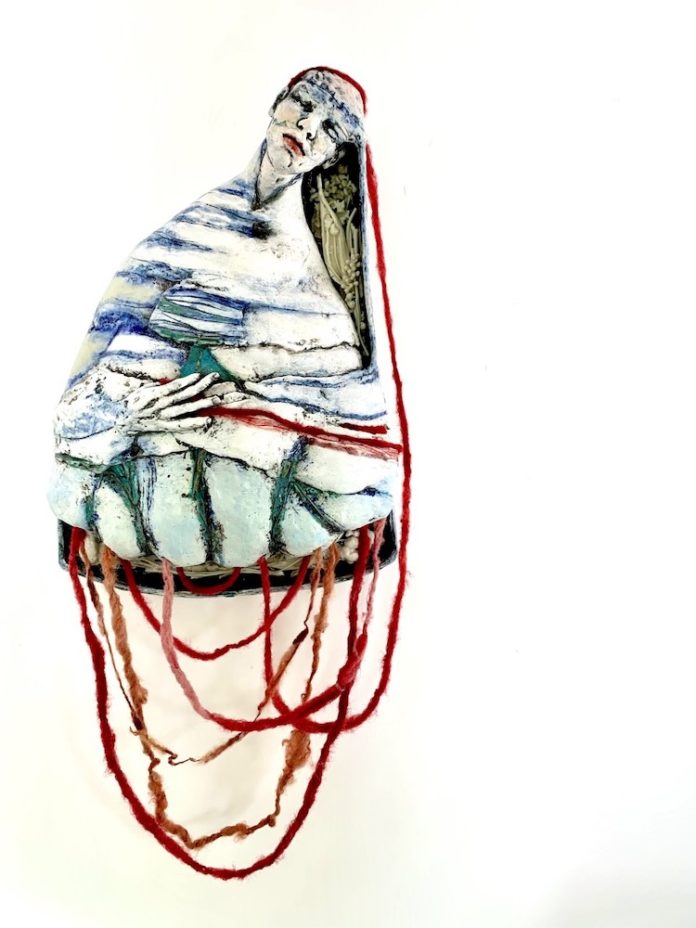 SMITHVILLE – Ceramic sculpture artist Asia Mathis will have her work, “My Middle Tells the Truth: Weaving the In-Between,” on exhibition at Tennessee Tech University’s Appalachian Center for Craft through Sept. 28.

“With this work, I am investigating this part of human fragility both physically and metaphorically, Mathis said. “Our ‘middle’ self; our core honest selves, both as individuals and as a culture, is also that which is most vulnerable, yet essential, allowing for truth-telling and deep connection.”

This will be Mathis’ first solo gallery show. There will be 12 wall sculptures surrounding two central figures.

Mathis received her Bachelor of Fine Arts degree from Middle Tennessee State University in 1999. She has participated in many fine arts fairs around the country, and Nashville area gallery shows.

She took several years off to be with her children full time, but is now back at work, continuing her education in clay and life.

The concept for this work grew from her own experiences of her middle body after having two children. Her middle was changed forever both in looks and in functionality. She began to be conscious of body image cultural conditioning more than ever before, as well as to experience many aches and pains due partly to torn and unrepaired abdominal muscles from her pregnancies, according to Mathis.

She said much of her daily thoughts were consumed by these issues, and her feelings about her middle ran the gamut from mild irritation to outright disgust. Only intellectually, and occasionally did she consider her middle as something she might accept or even celebrate for its ability to bring two humans into the world.

Mathis said it became the thing she did not want anyone to see, and the physical pain she did not want to acknowledge. At the same time, many of her relationships felt strained under the weight of the COVID-19 pandemic, the political climate and human rights issues.

“I realized that I was hiding my middle emotional and mental self, or my truth, for similar cultural conditioning reasons: so, others would not feel uncomfortable, so I would not be thought of as offensive, and so I would be seen as attractive,” Mathis said.

She said her “middle” was and is both a negative and positive in her life. It is wrinkled, bulging skin as well as inaction and regretted words. It is also a catalyst for bettering her health, for art, and for working through relationships, including with herself, with honesty and empathy.

“This work has proved somewhat healing for me. While I continue to attempt to literally weave my muscles back together, I am also ‘weaving the in-between’ with my people, and community…. or at least I’m trying,” Mathis said.

The ACC is located at 1560 Craft Center Drive, Smithville.